I have always loved bikes 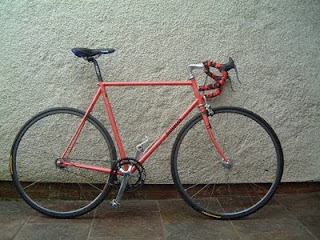 I have always loved bikes.

My mother bought my first from the bin-men; I’d spotted it hanging from the back of their cart as they passed our house. She paid them ten shillings and told me to share it with my brother. It was purple and red with a step-through frame and a white sprung saddle. I learned to ride with stabilisers, removing one, then the other a few weeks later. When I first rode without them, I peddled straight into the back of a parked car and knocked myself out.

That bike gave me my first taste of freedom. I’d cycle down our tree lined road, turning right into Etal Avenue, then left to the cul-de-sac by the station, where I’d watch the children on the other side of the line, laughing as they sledged down the railway sidings on wooden boards.

Later I was given a green Hercules that had been standing outside for years. I spent days taking it apart, scraping off the rust with brillo-pads, polishing the chrome. It had a three speed Sturmey Archer hub, but only two gears would ever work. Not that it mattered; to my eyes it had a cross bar, thin wheels and, most important of all, drop handlebars. It was a racer!

I soon learned, that my Hercules was no racer at all, and that Sturmey Archer gears were the stuff of derision amongst the cognoscenti at school. Ten speed derailleurs were the right stuff; Raleigh Choppers were acceptable too – they were best for giving ‘backies’ and were popular with the kids from the council estate.

You’d find it hard to buy a junior racing bike nowadays, though the Chopper is making a comeback, re-launched as a retro alternative to the mountain bike. My boys don’t see the appeal. ‘One wheel’s smaller than the other. It’s like a girls bike,’ they say. I think it’s marketed at Dads – like those, who years ago, longed to ride on the other side of the tracks.
Posted by The bike shed at 4:28 PM