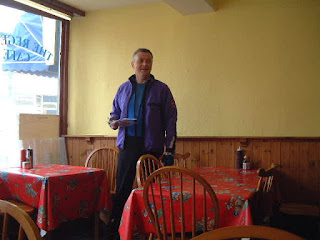 The subject of good caffs, or rather the lack of them, was in the air at my cycle club the other week. It's all supermarkets now was the cry, and they're not proper cyclist's caffs are they?

This got me reminiscing about the great caffs I've known, and being in a philosophical sort of mood, to thinking exactly what it is that makes a proper cyclist's caff.

For starters, you notice that I've used the word caff; not café, or tearoom, and certainly not coffee shop - all a poor substitute for the real thing.

A proper caff must have:

Equally, it mustn't have:

Your definition might be different to mine; it's a bit like good art: hard to pin down, but you know it when you see it. But if defining the perfect caff is tricky; finding one is altogether more difficult. Do any still exist, and if so, where are they?

The far north still has many good caffs, but that's a long way to ride for a cup of tea. A little closer, there are some good ones in the Peak District: Lovers Leap caff at Stoney Middleton takes some beating, as does Grindleford Station caff, tucked away under Froggat Edge. Both of these are climber's caffs, but this makes little difference; climbers, kayakers and cyclists are much the same – except cavers, who are very dodgy in my view, but that's a different story.

Wales also has some excellent caffs too. Pete's Eats in Llanberris even gets a mention in some good food guides. They used to offer a prize if you could eat all of the Big Breakfast - another free breakfast! Just up the road in Capel Curig is the Pinnacle Cafi ( Welsh for Caff); I once saw a cyclist there wearing shorts and a string vest when there was three inches of snow outside – he asked for a glass of orange squash.

In fact, my all-time favourite caff is in Wales. It's in Bala, renowned for its lake, its fair, and as a place you couldn't fail to score on a Friday night unless you were very, very ugly. In the middle of the High Street, just down from a hardware shop that displays most of its wares on the pavement is The Cyfnod. It is a shining beacon in a town without any supermarkets.

As soon as you walked through the door you could sense The Cyfnod was special. Its tables were pale yellow Formica, contrasting with the red leatherette benches that were screwed to floor so you had to slide between table and chair. On the walls, pictures of the Bala Women's Institute, circa 1971, (sitting proud and bandy legged in Welsh knitted tweeds), were placed side by side with photos of old Bala that looked much like the High Street outside. The serving counter was one of those glass chillers with a Frigidaire logo and the whole place doubled as the local chippy in the evening.

The smell of tea and sizzling bacon hung in the air as you waited for your breakfast, passing the time by trying to lift the vinegar bottle using only its spout and the tips of your fingers. (Never played this before? You've missed out on hours of fun) Even the waitresses were pretty.

The Cyfnod may have changed by now. But I hope not - for it was a Mecca to those of us who appreciated the finer things in life. In fact, I think I'll make a pilgrimage soon.