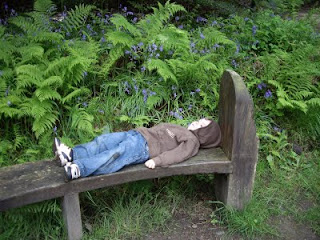 'Have you noticed,' I was ranting in the car the other day, 'That people don't dislike things anymore; they don't 'do' them.'

'They're not the same thing at all,' my eldest son corrected me. 'There are lots of things I don't like, but there are only a few I don't 'do'.'

'And there are some things I don't 'get,' piped in my second boy.

This seemed like an interesting idea, so I probed a bit.

Disliking things was straight forward. My boys took the opportunity to reaffirm that they really don't like sprouts; neither do they like their French teacher, and for that matter they don't much like girls - at the moment anyway. For my part, they reminded me, I don't like Harry Potter, visiting castles on rainy days, or being disturbed at the computer. We each had our own list that took some time go through.

Not to 'do' was something quite different. Not to 'do' means not only that you dislike it, it means active avoidance. More than that, in some cases it means you won't even contemplate the idea. 'I don't do pizza,' said my second boy, 'there's nothing that would make me eat it.' And after years of cajoling, subtle persuasion, bribery even, I can agree: he doesn't 'do' pizza. Our lists were shorter this time; Christmas shopping was pretty high on mine.

But not to 'get', it turned out, was different again. Not to 'get' means that no matter how hard you try, you simply can't comprehend what the attraction is. 'So it's not like when you don't 'get' the answer at maths?' I asked. Not quite, they told me, it's more that you don't know where to begin; you don't understand how anybody could possibly like it. 'Give me an example,' I said. Opera, they replied. Good choice boys.

I liked their distinctions and I liked it too that our lists got shorter as we went through each one.

We all have our dislikes, they are commonplace, they express our preferences (or at least one side of them) and to some extent they help define our personalities. If we liked everything, or if we all liked the same things, the world would be a less interesting place. And sometimes it's fun to list them; think of Room 101 – oh, there are so many things I'd put in.

As for not 'doing' things, I think it's a useful concept. All but the most bigoted and limited can see the value in new experiences, and hopefully we give things a fair try before passing judgement. Those who turn their nose up at anything new, or back off at the first sign of unfamiliarity, limit their choices and ultimately their enjoyment in life. But to plough on regardless is equally daft. So there are things I don't 'do' and I think I'm happier for it. Thankfully, there are not many, but having a few non negotiable seems no bad thing – especially when it comes to dancing.

I'd like to think there is very little in which I can't see any attraction at all. Musical theatre comes close; laddish banter defeats me; my wife says I don't get empathy (I can't understand what she's on about). If I tried hard I could list some others; obscure poetry perhaps, synchronised swimming. I'm not saying these are bad, it's just that try as I might, I simply don't 'get' them.

The good thing, is that this is the smallest of lists. I want to make choices, and I want my boys to make theirs, based on an appreciation of all that life has to offer. No doubt we'll dislike a fair amount of what we try; we might even choose not to 'do' a few; but hopefully, there is very little that we simply don't 'get' at all.