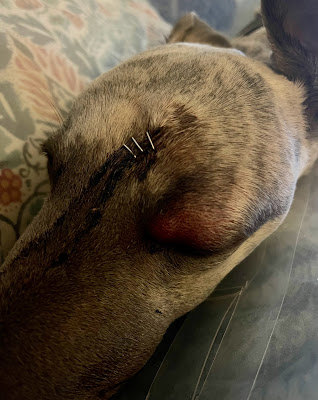 The thing about whippets is that almost everything is quick. Or slow depending on the clock. Oscar spends an hour at full pelt, followed by twenty-three on the sofa... watching me from the corner of his eye, hoping for food, fearing I might leave. ..

Even for a moment.

Which is all it takes to fracture your skull when you're running at 30 kilometres an hour, towards a ball that a greyhound has spied from the opposite direction. The chase instinct in sighthounds is irrepressible, their focus fixed, and in Oscar's case, his running line so straight that nothing distracts.  It's a joy to watch.

They collide at a combined speed of 50 kilometres and there's a tumble and Oscar's going head over heels, his legs buckled beneath him...

And he's not moving anymore.

As I run towards him he staggers to the owners of the greyhound, and my panic eases - no broken bones... Good boy, I call...  good boy, Oscar... it's alright.

Except it's not.  His head is split and there's blood —lots of it. The greyhound's owners are apologetic. I don't stop, say 'it's just dogs' and dash away, carrying him the length of the beach to the car; to the vets, to the vets...

He whimpers as I tear through the backroads, swearing at a tractor and again at an elderly driver slowing at the speed bumps.  Easy Mark, I say,  Better five minutes late in this world...

Ten more and I carry him into the arms of the nurse, who takes him away and suddenly I'm lost — as confused in my way as the poor mite being examined for what I'd hoped was merely a puncture wound.

That diagnosis was correct - only it goes all the way through his outer skull, stopping (we hope, but can't be sure) millimetres from his brain. There follows an explanation as to why X-rays aren't much use; talk of transferring him to Bristol and whether he'd manage the eight-hour trip.

Jane arrives and holds back tears. After more talking and waiting and calls and debate, they staple his wound and we take him home, hoping for the best.

There's nothing more to be done, they say.  Just love and rest.

We sit on the sofa and watch him for any movement; willing him to eat; fearful he'll leave us. But he's a tough little thing, looking at me now with one eye open as I type.  We're seeing the vet at 11.00; praying it's just swelling.

Funny how much you love these bundles of fur.

We too will be fractured till he heals.