Ripples on the sand 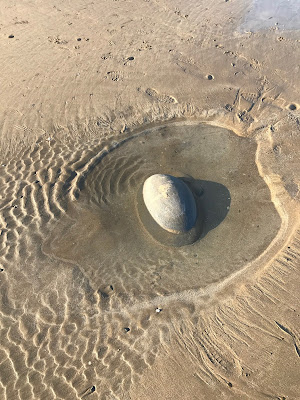 The beach this evening was all silhouettes; the tide ebbing as a westering sun cast shadows on the pools and rippled sand. A young couple walked hand in hand, paddling barefoot in the shallows. Oscar was having none of that, running instead over the silver streams that mirage the two-mile stretch to Rickets Head.

I've walked this way a hundred times. When our older boys were small, we'd come here day after day, them never tiring of the want to splash and dig. Back then it sometimes felt too open, too windswept—and too much a place where movement was needed, rather than the standing around and building of castles and dams that comes with little ones in wellies.

It's different now. Oscar wants nothing other than his ball: throw and return; throw and return... such ease in the way he runs, so swift he outpaces his quarry.  Whippets, I read the other day,  are the fastest accelerating dogs. I can believe it, as he sets off for the umpteenth time, his chase instinct stronger than any distracting scent or passing pooch. 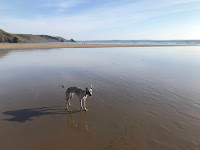 My youngest son—who's now in his teens—was obsessed with mechanical contraptions as a child. Try as I might, he took no interest in landscape or nature. Even camping, which he liked, was all about process not place; no sooner had we pitched the tent than he'd snuggle down and watch videos on the Ipad—preferably of trains. The cottage beach, as he's always called it, was—and still is—one of his few exceptions to the rule.

Which is pleasing, as we're relocating here full time, and walks like this will be part of the daily ebb and flow. To live within minutes of such a fabulous spot is a joy and privilege—for it to also be your favourite, must double the pleasure. Or in my case, triple it, for this stretch of sand and pebbles is redolent of memories I treasure; of times that will never come again.

Or at least, not quite.

This evening as I walked back to the car there was a family near the breakwater which borders the road. Two toddlers in oversize anoraks and blue welly boots stomped in the puddles—they built piles of pebbles and ran in circles together as their mum and dad (mid-thirties I'd guess) watched with collars turned up.

'I must have a hundred photos of mine doing the same,' I said. 'In this very spot too'.

'So it's not just us', they replied smiling.

We got to talking about parenting boys that are close in age, the companionship they have, the hardship they bring—and the joys too... I spoke of the times we'd spent on this beach, the pattern of our days determined by the sea...

'We never planned to have two so close,' she said.

'Neither did we,' I replied. 'Our first was conceived with IVF, the second a complete surprise... '  And from the look on her face I knew what she'd say next.

Her husband chipped in, ' We were told we'd not have children without treatment—or at least it was very unlikely. Then before we knew it we had two...'

'Buy one, get one free,' I quipped, explaining that in our day there was no NHS funded fertility service.

Oscar began scratching at my pockets for his ball. 'It was nice to meet you,' they said, as I put him on the lead.

'You've taken me back,' I replied, shaking my head in disbelief...

By now, the sun was almost to the sea, the air chilling in the way that spring evenings do.  I climbed the bank of stones and wondered how imperceptibly slower my movements will become each year. At the top I paused; there were new silhouettes on the sand—night fishermen, casting lines from the shore.

The tide here is a long time turning.