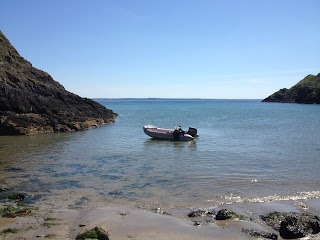 On Thursday we dropped our eldest son at Whitesands where he was spending the day with his girlfriend and her family. He'd given us strict instructions not to 'lurk', which frankly, is understandable given the embarrassment potential that parents have for teenagers -  no doubt made worse by the prospect of us donning bathing costumes.

So instead Jane and I went to Porthmynawydd, one of my favourite beaches and somewhat of a Pembrokeshire secret. Perhaps the term 'secret' is a bit strong, for Porthymynawydd is seldom deserted in summer -  but on a day when the car parks were overflowing, there were less than a dozen people who'd made the one kilometre walk to reach this peaceful haven. 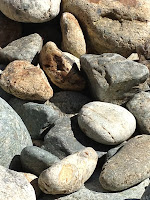 In fact, half the 'crowd' hadn't even done that; instead, they arrived by boats, launching from Solva, about three miles to the west. Some others came on kayaks, paddling from Newgale, a mile or two to the east and no doubt wondering why they'd not known of this place before. You'll understand from this, that Porthmynawydd is within easy reach of the tourist hot spots of West Wales.

And yet it's a world away. The bay is formed by a deep cove and headland (Dinas Fach), sheltering a shallow and soft sanded beach. The high cliffs enclose the horizon, adding to the sense of remoteness - and they still the waves, creating, at high tide, a shallow lagoon that's perfect for swimming and messing about. There are caves and rock pools, diving platforms and crystal clear snorkelling. One chap there on Thursday caught a huge spider crab, bringing it back for inspection before releasing it again. 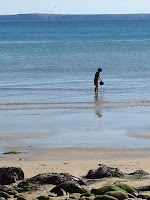 At high water, the beach, as with most in Pembrokeshire, is all but gone - but no worries, for this gives the best swimming and the cobbles are fine, if a little lumpy, for sunbathing. Once the tide ebbs the shallow ground means the sand is quickly exposed and at low water, it extends almost to the headland. There is seldom any weed, there are no sharp rocks and the position of the cove means there's minimal tidal rip to worry parents. If you're lucky a seal or two may pay a visit, and the rock pools on the cliff shelves are abundant with blennies and anemone.  The only downside is the barnacles which coat the lower rocks - I'd advise sandals or booties for any scrambling.

But that's enough description - for more, you must visit yourself. 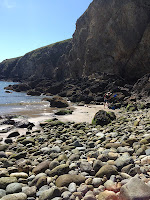 Porthymynawydd is more usually known as Pointz Castle, the name of the farm at the start of the access track. Pointz Castle lies two miles west of Newgale on the A487 at grid reference 831237. The track starts just past the farm and there is a good parking spot here. The route is well marked and obvious - just head down and follow the stream to the cove. In fairness, it's a steepish walk back, but like all good things, some effort is required.

Often I've read landscape writers describing this or that 'special place', but not revealing the location, claiming that to do so would risk the invasion of crowds. This seems a little selfish to me, and in most cases overestimates the reach of their work and the impact of recommendations. With the exception of disclosing sensitive wildlife sites which might be abused (remember the days when Red Kite nests were guarded by the military?), I take a more generous view; in any event, that one kilometre walk will always deter the tourist hordes. 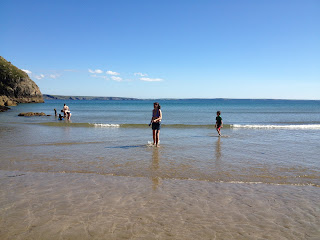 Our day ended with the tide ebbing to low. We took a wrong turn on the coast path and ascended the western cliffs, only to have to descend again. From the summit though, I could see over the sweep of St Brides; there were tankers at anchor off Skomer, a heat haze softening the sky, and the cove below us - a sparkling jewel in what is already a golden crown. 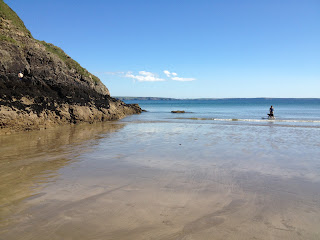 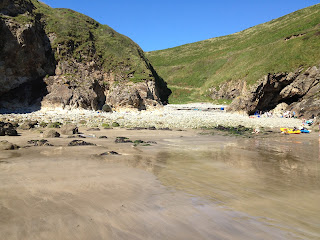 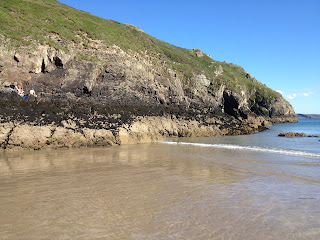