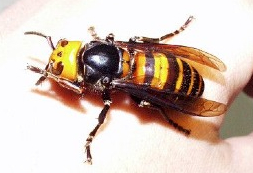 Have you ever seen a hornet close to? I thought I had. My father used to claim he'd been stung by one - right next to my eye, he'd say, like a dagger; could've blinded me. If ever we saw a large wasp, to him it was a hornet; and as you do when you're a child, I believed him.

But this summer I saw one for real, in the woods at Somerford Common. It was hovering near a mound of straw, a nest of some kind with a small tunnel entrance. And it was huge - the hornet that is - this wasn't a large wasp, it was a golden, iridescent, gob-smacking monster. It's enormous, I kept saying aloud; absolutely bloody huge.

In truth, it was about the size of my thumb. But when you see something so wonderful and so unexpected, its presence distorts and focuses your perception. You'll have experienced something similar if you've ever photographed an animal in the wild, thinking it filled the viewfinder and yet the end result was a disappointing dot on the horizon.

And even if it had filled the frame, it could never be the same. That hornet is burned in my memory more surely and with more reality than any digital image. For a good few minutes, I watched it hover in and out of the entrance, moving forward and back, never changing its orientation, droning and buzzing like - well, a hornet.

The noise and size of hornets has led them to be misunderstood, feared even. Yet their sting is no more powerful than a bee, and they are far less likely to attack. It's a common occurrence for hornets and birds to share the same hollow tree. Though evidently, it's inadvisable to kill one near a nest as this releases pheromones that can disturb and 'anger' a swarm.

But who would want to kill such a fabulous creature? This year I've seen some wonderful animals; I watched a Peregrine stooping over the cliffs at Ynys Barry, a million starlings massing at Plumstone, a seal giving milk to its pup... and yet I reckon that hornet was the best by far.

My father was surely wrong. I don't doubt he was stung by something, but hornets don't reach as far north as Northumberland, and nothing we came across compared to what I saw this summer. I can still see it now: the plates of gold, the wings a-blur, the jewel in the straw. God, it was huge.
Posted by The bike shed at 7:35 AM