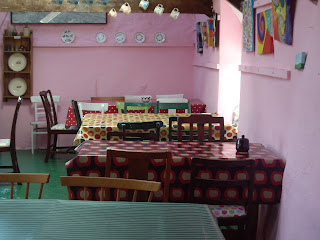 Advocates of good food often talk of the need for seasonality. Real strawberries, they say, ripen in an English summer and not a Spanish poly-tunnel in January. The equivalent applies to apples, tomatoes, asparagus... you name it. What's more, by embracing the idea that different seasons bring different produce our enjoyment is enhanced - we appreciate the harvest and look forward to the next.

It's not a perfect analogy but something of the sort applies to one of my favourite places to eat. The Pink Caff (at least that's what I call it, for so far as I know it has no name), on the road between Newport and Cardigan, is open for a mere six weeks a year. Pembrokeshire's summer visitors make it a viable enterprise, but it's locals in the know who most eagerly await the appearance of the roadside billboard. This year I made a few early forays in the hope they'd extended their season, but no luck; I had to wait like everyone else.

And it was of course worth it. Yesterday, I had fish pie washed down with home made ginger beer, both as real as they come - and just the job after a walk along the delightful river Nevern. Dylan had a doorstop sausage sandwich, Jane's was crab and I swear there was a whole one in there; Mike tucked into a plate of chilli. The food is simple, home cooked, fabulously tasty and served on a jumble of old crockery at rickety tables in a botched up barn. Frankly, it's brilliant. 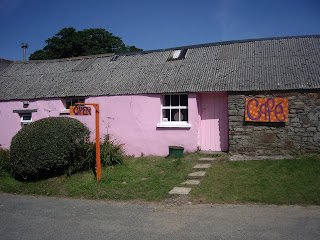 What I so like about the Pink Caff is it's lack of pretence. You go there for great food in relaxed surroundings; not to be fawned over or seduced by an out of place menu offering seventeen different coffees all ending ino. And the barn has its charm too. The table next to us yesterday described it as shabby chic -  its the sort of place you actually talk to other people - but that's not quite right.  It's more cobbled together than that - I'd say hippy-chick and cheerful, finished off with whatever's to hand. Like my new writing shed, it's very simplicity is the whole point - you either get it or you don't. 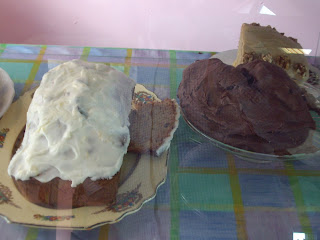 I resisted a pudding (though Jane didn't), which is quite a feat, for they don't ponce about with those either: rhubarb crumble, ginger sponge, chocolate pudding, home made cheese cakes - half portions available for the kids though I've never seen one ordered. And now I'm rather regretting that I did, for as I said at the start of this post there's a finite season for the best of foods.

What a shame, I shall have to go back there soon. 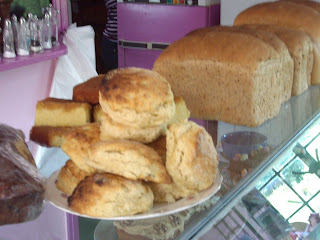