Of sheds and dens and being a boy 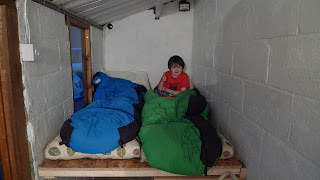 Last week we had the builders round. Ostensibly they came to mend the fence, but before that I had a couple jobs which needed sorting in the potting shed. Just a bit of a tidy up, I said to Jane, and the electrics look ropey too. (I find that dodgy electrics is never questioned).

There followed a trip to B&Q: reels of cable, new sockets, masonry paint, thirteen lengths of 'two by four', three plywood boards, door hinges, polyfilla, junction boxes, woodstain - and a bill for two hundred quid (shhh...). Like I said, just a bit of a tidy up.

My grandfafther had a good shed; he called it his cabin. It was a gimcrack lean-to, painted pillar-box red and furnished with a bed for his afternoon naps after a few pints at the club. The shelves were stacked with jars of string or screws and bottles of unspeakable potions; he'd pasted the walls with our childhood drawings and we played there while he snored and the afternoon sun filtered through the net curtains. I'd have stayed there forever had there not been a time to go home.

My grandfather was clinically blind, and yet he had knack for dens. Once, he took us 'camping' (effectively a day trip to some wasteland) and we cooked sausages on an open fire, baked potatoes in the embers. I'll show you the tramps nest now, he said. And he led us to a tree with a whacking great platform of straw - it was big enough for two small boys, or a tramp, to sleep in I suppose. I remember him leaning on the trunk as we climbed the boughs; I'll just close my eyes, he said. I've never found a tramps nest since, and I've always wondered how he knew it was there. Wonderful man.

All my life I've delighted in sheds and tents, even mountain bothies. In a way they are all the same - a haven from the stress and pomp of the everyday world. It's an irony that by cutting out all the 'stuff' we work so hard to accumulate, we find a simpler, more profound pleasure.

But let's not get too philosophic. For there is something very uncomplicated about building dens. When my boys were small I taught them how to make shelters from sticks and bracken - now they are older they do the same with their younger brother. And when they get too distracted by their girlfriends or just generally surly, I and the little one go camping. Mostly we go a few miles from home, sometimes to the garden; it's as much about process as place.

All of which is long digression from my builders and the cost of materials. I left them to it as we headed to London - posh hotel, chaotic tubes, expensive restaurants - had enough after a couple of days. And driving back I mentioned casually, wonder if they've finished the fence?

As it turns out they did. But more importantly my new den was ready. My grandfather would have built it himself, before he lost his sight. But I'm time poor and I think he'd at least approve of the design. It has storage locker that converts to a bed, electrics (no longer dodgy) for a kettle and and a bench for writing. There's room for some homebrew, walls for Dylan's pictures, even shelves for a printer, books - perhaps jars with string and unspeakable potions.

And on Thursday night, before we'd even unpacked, Dylan and I tried it out. Your great grandad had a shed like this, I told him, his eyelids closing. He called it his cabin and I used to ...

Welcome everyone, to the new home of the bike shed. 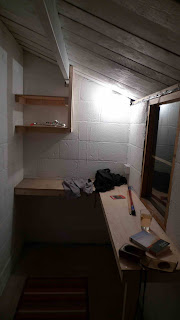 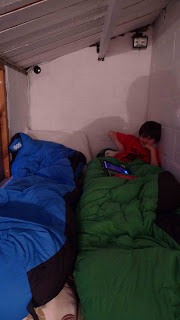 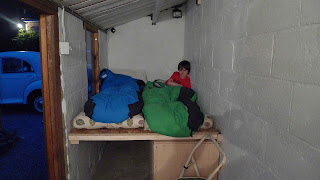 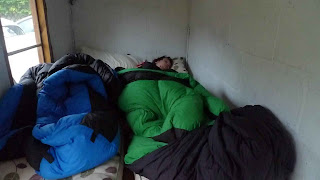 Labels: About me, Dylan, Family, Wiltshire