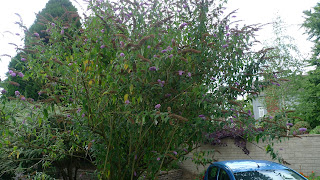 In the front garden of my Wiltshire house is a towering buddleia. It dwarfs the privet hedge, dappling the lawn with shadow and brushing the roof of any car on the drive. One of the reasons I bought this house was that bush. In July it is thick with flowers and bees - there ought to be hundreds of butterflies too.

Yet this year I've seen only a handful feeding on its plumes. It was twenty five degrees on Saturday and there were two Red Admirals displaying, last week I saw a Large White; there has been the occasional blue. But that's about all and it's a worrying trend. The nature charity, Butterfly Conservation, organises a public recording scheme - The Big Butterfly Count - and the results show   serious declines in the number of Tortoiseshell and more recently Peacock butterflies.

I had thought this would be a good summer. Our spring came early and it's been the best weather for years. But of course there are other factors - we had a very cold winter, last August was wet and the climate on the continent affects migration of many species that we mistakenly regard as residents - Red Admirals being an example.  I suppose it's just possible that my garden isn't as attractive to butterflies as I'd imagined - only time will tell.

But I've found compensation for my disappointing buddleia in a local woodland. If I asked my neighbours for directions to the Three Crowns at Brinkworth, I reckon the majority could oblige. But if instead I queried the way to Sommerford Common (a mile or so from the pub), my guess is that I'd draw a blank. That's not surprising because it's hardly a visitor attraction.

Though perhaps it ought to be. For yesterday I went there with Dylan and Jane, and in a little more than thirty minutes we saw twelve different species. The highlight was a Silver Washed Fritillary crossing the forest break in an effortless glide. Earlier this summer I've seen Marbled White's, Large and Small Skippers, Essex Skippers (a misnomer if ever there was one) Ringlets, Meadow Browns, Brimstones, Gatekeepers, Common Blue... many more.  Some of these were there yesterday; as were dozens of Peacocks feeding on the thistle heads, so drunk with nectar I could hold them between gentle fingers.

Sommerford Common is a site of scientific interest, a haven for butterflies and specially managed to assist and encourage insects. As far as I can tell that management seems largely to consist of leaving the trees well alone and clearing the breaks of debris - this creates corridors of light that are conducive to flowering shrubs and meadow grasses. And yet that simple policy results in a transformation in the levels of wildlife.

Walking there with Dylan was like going back to an imagined childhood: insects rising at every step, the chirping of crickets, dragonflies hovering over the scrub, jewel like beetles and damselflies, moths, butterflies, ladybirds... literally, hundreds of thousands of insects. Earlier this summer I went there and saw a hornet  coming and going from a hollow in the grass; I stood motionless, gobsmacked by this fabulous creature that I'd longed for years to see.

There were no hornets yesterday and no White Admiral butterflies tough I'm convinced they must be there. And Dylan to be truthful wasn't up for looking much longer - he'd paid his usual attention to nature by insisting we play Star Wars throughout the entire trip. For the record, I was a Droid, Jane a Wookie and he was the Evil Emperor - any resistance was futile and looking for more silly butterflies would result in instant death. A White Admiral he assured me was no match for The Force.

As we neared the car a hawker dragonfly flew past and I suggested we play something different. How about I Spy? Something beginning with.

He looked at me disdainfully. It's going to be a B, isn't it?

Actually Dylan, it was going to be a D. D for drag..

I know, I know, he interrupted. It's Darth Vader!

Oh well, I suppose we're all different.
Posted by The bike shed at 2:59 PM