Thoughts on flowers and landscape 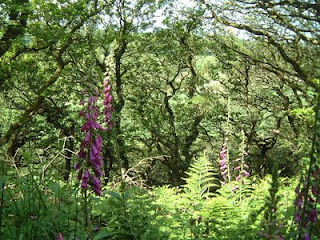 The Pembrokeshire lanes are past their best. In June they sing with pinks and blues and the trumpets of foxgloves, gorse buds crowning the higher verges. The tradition here is not to use hedges between the fields, but to pile earth over stones, creating steep banks that effectively become meadow strips. By July the flowers are browning, long grasses bending over the last of the pinks; soon the council will be trimming the verges, clearing the roads for the hoards of summer tourists.

This process of cutting back is evidently essential to ensure the flowers return next year; like true meadows the banks need to be 'harvested' though I couldn't fully explain why. Indeed, I was thinking about this yesterday as I walked with Jane down the old drove road, noting all the flowers I could name and the many more I had no clue of. Wild plants, I said are something I know very little about.

That statement is relative. I clearly know something about how they thrive on the Pembrokeshire field banks, and for all I used the words 'pinks', I do know a Ragged Robin from a Red Campion - the blues would fox me though. I may not be able to name more than the common species but I'm generally aware of the presence of plants and their effect on the landscape.

Apart from butterflies (about which I do know quite a bit), the same goes for most aspects of natural history. I can identify more birds than the average person, but as soon as it comes to the 'little brown jobs', I'm lost. Moths I could tell you the family grouping but then it might get sticky; the same for fungi, sea life, and dragonflies. As for beetles, bugs and spiders... and what exactly is a lichen?

The truth is I'm a generalist, and a thin one at that. I know a little about everything and have a wide selection of identification guides for the times I bother to look things up. When I do, I'm usually checking for the name, which, when you think about it, is also a pretty superficial knowledge.

Last year I spent a week in North Wales with Nigel Brown from Bangor University; he knew more about the natural world than anyone I've ever met - he certainly knew about lichens, explaining that they're the symbiosis of a fungi and an algae. He knew too about the geology, the mammals, the rivers and the weather; we ran a moth trap every night and looked at stars through telescopes. A fascinating time, and if you're interested he's running a coastal wildlife weekend this september.

I shall never have Nigel's wealth of knowledge, but I've come to accept that's okay. I've realised something else too: that if I have any specialism at all, its an acute 'sense of place'. That's an imprecise concept, but I suppose I'm very aware of the overall the landscape, its relationship with the wider geography, culture, present and history. It's not enough for me to look at the mountains and rivers, I want to climb or kayak them; I want to walk or run the coast paths, to stand under the waterfalls, visit the derelict quaries, remote coves and down at heel towns. In Wales, where I've been doing this for twenty years, I'm acutely aware that I don't speak the language.

It is significant I think that although I write a lot about landscape I seldom take notes. I'm as likely to create a montage of photographs to trigger inspiration than to refer to lists or jotted reminders. Yesterday I could have picked some flowers to identify, but I didn't. Most important to me, is the way the landscape feels and that is largely an internal thing; a kinesthetic experience, in the language of the neuro-linguistic types. It is something more than knowing the names of plants or birds.

Or perhaps I should say it is something different. For deep down I wish I knew what those blue flowers were called, and those little brown birds that flit between the hawthorns. As for the browning grasses that define the lanes in July - I've never really thought about those.
Posted by The bike shed at 9:42 AM

Labels: About me, Pembroke diary