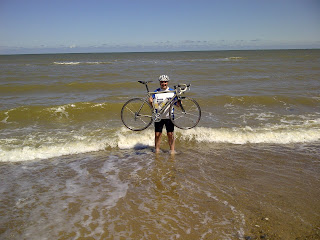 It's nice when a plan comes together. Especially when it's others who benefit as well as yourself. So the picture of me with my bike in the sea - taken last Friday - is as much a celebration for them as it was for me. It marked the end of a six month and a five day journey.

Last January I had an idea. Why not organise a bike ride from my company's most western depot in Aberystwyth to our most eastern in Norwich, and then on a bit more to the sea? We'd travel from coast to coast, across the middling spread of England and Wales. And as part of the deal we'd all raise some money for charity. All I needed were some others to join me and a bit of training.

Finding volunteers wasn't a problem and my company got behind the plan with gusto. The training wasn't too bad either and last Monday myself and twenty colleagues set off over the Cambrian Mountains. Five days later we arrived in Norwich having raised around fifty thousand pounds for charity. For my part, when the cheques all come in I shall top two thousand pounds for Whizz-Kidz. To all of you who sponsored me, encouraged me, and inspired me, many thanks - you can take pleasure in knowing that your donations really will make a difference.

But what of the ride itself?

It's a long time since I rode a tour of that length and my legs are sore, but the impressions are more than just physical. Crossing the country by pedal power has left me with thoughts, not all fully formed, about the landscape, the places and the people we passed. Most of it is positive, if a perhaps little biased.

If I'm honest about the landscape my overriding impression is that after Wales it was all down hill. Given the height of the mountains this is almost true topographically, but it's also true, for me at least, in a scenic and cultural sense. It's not that Shropshire or Warwickshire or Northampton or Cambridgeshire don't have their good points - it's just that none of these could lift my spirits as do the mountains and forests I've adopted as my second home these last twenty years. The only sadness was the wind turbines despoiling the hills above Cwmystwyth - why is it, I wondered, that I saw more turbines in Wales than the three hundred miles which followed. I could weep, I really could.

The sound of the landscape is pertinent too - and again, the further east we went the quieter it became.  Not from lack of road noise (that tended towards the opposite) but from birdsong - never before have I been so aware of how silent the huge industrialised fields of modern farming can be. It was eerily so at times, and all the more noticeable as we passed the intermittent hedgerows from which the chattering would return.

And yet I rather liked the Fens - to some extent they were an exception that proved the rule - I especially liked their wide skies and whispering fields of corn. We met a farmer near Ely who allowed us to shelter from a storm in his barn - he and his brother worked five hundred acres with the help of two tractors and his wife who graded the potatoes. He told me he had always wanted to go to Wales to see the hills, though he loved his flatland farm and pointed out, with pride, that it was below sea level.

My impressions weren't just of landscape. Most of the people I rode with were neither experienced cyclists nor the senior managers I typically know. They were front line staff, out to do something different and significant. They rode with courage and humour and were supported by wives, fathers, brothers, children, colleagues, customers... Throughout our week we recieved hundreds of messages, emails, tweets, blog comments and personal visits. One of the most memorable moments was the unexpected visit by the family of one of our riders, his children waiting for us at a village green with cakes and drinks and banners.

And so on Friday lunchtime I arrived at the east coast, at California Norfolk. Ironically there were turbines off shore, just out of shot in the photograph - that too gave me pause for thoughts, but I'll leave those for another time. Most importantly, I'd made it - half a stone lighter and a great deal prouder of myself, my colleagues, my company and even my adopted country, than when I began.

Like I said, it's nice when a plan comes together.
Posted by The bike shed at 10:11 PM

Labels: A to B, About me, Bikes, Wales