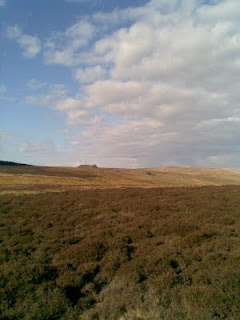 The road going north from Tufton crosses the the Preseli Hills in three distinct pulls, each a little steeper than the last. At the head of the pass there's a scruffy layby-cum-car park from where you can walk to the iron age forts of Cerrig Lladron, or take a longer squelch up Foel Cwmcerwyn. The later is the highest peak on the Preseli ridge, not quite a mountain at 536m, though it feels that way when you're up there.

On Saturday I cycled over the pass, on my way to the delightful estuary at Newport. It is seldom busy in these hills, but the heavy showers meant there was only one car at the summit. I didn't hang around, freewheeling into the lee of the wind, then stopping to don a jacket before the steep descent to the sea.

It was then that I saw the kite, hovering above the slope to my right, it's distinctive fan tail held upright to the wind. It was prowling the hillside, flying just above the scrub, crisscrossing the moor in a meticulous search. As it neared the road, it saw me too, came nearer and hovered only meteres away.

It was big for a red kite, through the wind was ruffling its feathers and I wonder if at this time year they moult, for they looked ragged. The bird held fast to its position, arched wings on the edge of stalling in the ridge lift; its primary feathers spreading and bending with each gust. I noticed its head was much lighter than the body, almost white, and smaller than I expected - very neat, more like a hawk than a buzzard.

The kite must have stayed there a minute, perhaps more - each of us looking at the other, fascinated in our ways. They used to be rare in this part of Wales and though still not common, red kites are no longer endangered. Shortly after I met Jane we cycled on a tandem from Rhayader to Tregaron, passing the then only nesting grounds above the Elenydd dams. You'll not see an adult bird, the lady in our guesthouse had said - they're all on the nests or out hunting in the hills. But she was wrong - for a male came to hover by us on that road too; it kept backing up as we neared, always facing us, maintaining a distance of perhaps three or four metres. It stayed with us for more than a mile.

That was twenty years ago. There were military lookouts on the road that weekend, guarding the nests from egg collectors. Since then the red kite has made a remarkable comeback. It has been reintroduced elsewhere in Britain, though it is the birds in Wales that are the original natives. 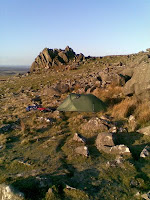 And as I'm writing this on the solstice I should mention that over to the east of where I saw the kite on Saturday comes a different original. For on the slopes above Mynachlog Ddu, at Carn Bica and Mynnydd Bach are the bluestones - it is rocks from here that form the first and inner ring of monoliths at Stonehenge. A few years ago I walked the ridge and camped overnight with my son amongst these rocks; we woke to frost and saw a kite that morning too, above the lambing fields as we descended to our pick up at Crymych.

The kite eventually left me, gliding low over the moor; it flushed a skylark and carried on toward Brynberian. Moments later its silhouette fused with the heather. I zipped my jacket, tucked low to the wind and flew down the hill before more showers arrived. 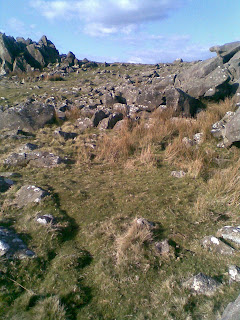