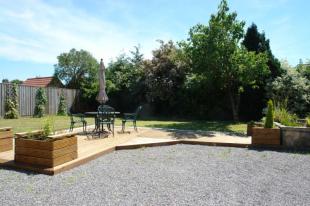 The back of my garden - pre pruning
Yesterday I saw my first Spring butterfly, a glimpse of acid lemon in the dappled light of my garden. It was a Brimstone, one of our longest lived species; the adults survive the winter by roosting in woods  before breeding in spring. This one flew strongly, spiralling above the trees then heading to the park.

I came to this house last October and have not felt entirely at home since. Jane loves the Edwardian feel, the period doors and leaded windows; my bigger boys like the extra space; Dylan, his room with a secret cupboard. As for me, I was happy where we were, felt no need for any of these things - but I have always liked the garden. When we came to view, I spent more time outside than in. There's a raised fish pond, two walnut trees, a wisteria over the entrance. The day I agreed to the move, I counted twenty butterflies on the buddleia.

But the garden was overgrown. If I was kind I'd say the previous owners had a wilderness approach; more likely, they couldn't be arsed or it all became too much. It took four truck loads to clear the first pruning, I found enough soil down the side of the garage to fill a raised bed; now the borders are cleared we have all manner of shoots and bulbs responding to the light. 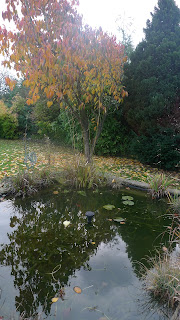 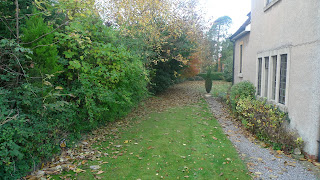 I'm too impatient to be a proper gardener. At least that's what Jane says. I ought to wait a year, see what comes through and plan it properly. She's right I'm sure, but this winter I needed progress. I wanted to clear the debris, establish a scheme and reverse the neglect. So in four months we've rebuilt walls, cleared the ivy, dug out dead trees and finally, last week, I went to buy some plants.

I chose three fruit trees - an espalier apple, a matching pear and a prolific plum. They are for the rear lawn, the one area our predecessors had cleared, because in so doing, they were able to create a building plot. What they left was a blank canvass and a twenty metre fence with three climbing ivy (as if they didn't have enough). It will take years to mature. When the borders are sorted I plan to add a cherry, perhaps a damson too, eventually I'll have my own little orchard.

In the meantime, I've press-ganged the teenagers into helping. Yesterday I watched the two of them, six feet tall now, laughing as one sprayed the panels and the other dabbed his brush with a practiced incompetence. Dylan rushed amongst them, fighting monsters and insisting they hurry. Me and Dad are going to camp here tonight, he said. Are you sure, his brothers asked?  Of course we are, Dylan cried, we're going to camp hear for years and years, aren't we Dad?

As I write this post Dylan is asleep in his bag and my back is easing from eight hours on a thin mat. In the tent we read stories, listened to the rain, and talked of how one day he'll be as big as his brothers. But it was only as I tiptoed past the new the trees that I made the connection.

I could have bought something easier: faster growing, less expensive, simpler to mange -  plants with a more instant gratification. These trees will take years, I thought; I'll be in my dotage before they're at their best. What's more, I know next to nothing about growing fruit. My dark side said, I'll probably get it all wrong...

But it can't be that difficult surely? They are pretty robust things are fruit trees. No doubt, they'll need some pruning, the espalier especially, and I expect I'll be as frustrated by their progress as I'm delighted by their blossom. Frankly, fruit will be a bonus. More than anything I know they'll take time, care, and a commitment to place that I hadn't expected to make.

And with that thought, I felt more at home than I have for months.
Posted by The bike shed at 7:11 PM

Labels: About me, Other stuff, Wiltshire