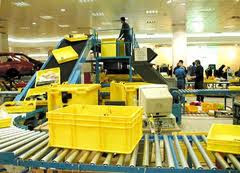 Image from Google Images
As I sit in my makeshift home office, packing boxes strewn around the room, I am conscious of how uncomfortable the process of moving can be. It isn't so much the physical process, the frustration of having no Internet, or even the constant thoughts about what might go where and what colour we should paint the bedrooms  - that much I had expected. Rather, I have realised, it is the temporary absence of  certain lass than oobvious possessions that has so disturbed the order of my life.

For a start, I hate being without my books.  The fact is, I  have little need for any of them this week, but it still upsets me. And where are my paints? Come to think of it, what about my notebooks, and my binoculars and my camping equipment - I know I don't need it either, but I want to know were it is; that it is still there.

Get a grip. Here I am considering myself to be an non materialistic person, and yet take away my chattels and I'm approaching a mini break down.

Which brings to mind the performance art of Michael Landy, who ten years ago destroyed all his possessions in a public event called Break Down. It took place in a defunct C&A store in London and over a period of weeks he catalogued and destroyed absolutely everything he owned - from a Gary Hume painting, to his passport, his clothes - even his house keys.

Despite my cynicism of  much performance art, I remember being affected by the idea behind Break Down. It seemed to me audaciously brave to carry it out so completely. Perhaps at a subconscious  level I was horrified by the thought, and it has taken a house move to confirm it. I would like like to think that our possessions do not matter much - that the best things in life are not things at all - but I suspect that for me it is a naive and fanciful view of myself.

Michael Landy's latest project was called Art Bin. It involved the destruction of thousands of works of art , including contributions from Tracey Emin and Damien Hirst. He billed it as a homage to artistic failure, encouraging amateurs to ditch their forgotten works in a large skip that was taken to landfill. The idea feels almost as brave as Break Down.

For in the corner of my makeshift office is a deep stack of paintings, most of which will never be hung on a wall - in truth, many of them make my toes curl with embarrassment. And yet they are part of me, a physical manifestation of my past; some better ideas and some crap ones. I shall probably move them to the loft next week, but at least I'll know where they are; that they are still there.
Posted by The bike shed at 6:04 PM

Labels: About me, NABLOPOMO, painting