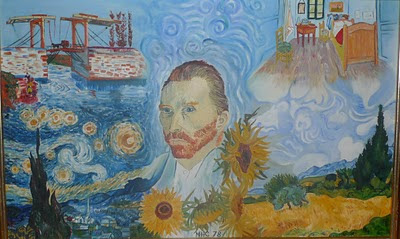 The picture above was painted in 1978. It was my first large oil painting and the first time I had used canvass. Like the artist it depicts, the picture has a turbulent history.

I entered it for the school art competition but the judges rejected it because they considered it a copy. My art teacher (not one of the judges) was so annoyed by the decision that she arranged a separate display of my work. Another teacher so liked the display she gave me my first commission (all of £15) for a variation on Van Gogh's sunflowers. My father liked the painting too and kept it hidden when my parents divorced. Some years later I found it displayed it in his dinning room; I took it back to spite him after he had our family dog put down. Looking back, I don't think the decision of the competition judges was that unreasonable. What they perhaps didn't consider is that copying famous works is a valuable way to understand the painting and the artist.  In a sense, this is what happens when musicians play concertos. But the best copies are also interpretations and my painting fails in that respect. Many years later I discovered Francis Bacon's transcriptions of Van Gogh which is  how to do it properly - but to be fair, I was only sixteen when I painted mine.

The shoe painting was completed around 2001. I was fascinated by the way London fashion boutiques would display luxury shoes and handbags as if they were works of art. And yet when I looked closely, the items were often ugly or kitch, made more offensive by hugely inflated prices. The displays were both beautiful and repulsive - and it was that uncomfortable sensation that I was responding too.

And so began a series of shoe and glamour paintings. To me they have an edgy quality still, because I regard them as a failures, and yet many people have asked me if I have more. As I pulled this one from the loft and tossed it onto a pile of old canvasses my middle son said, 'Great shoes Dad! Can I have it  for my wall.'  And that, I suppose, sums up why they are imperfect.
Posted by The bike shed at 7:35 PM

Labels: About me, NABLOPOMO, painting, Past Imperfect