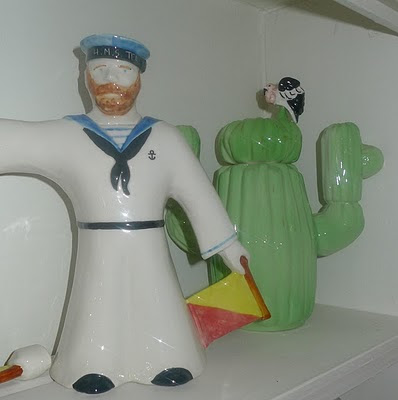 I started collecting novelty tea pots when I met Jane. We lived for a while in a small terraced cottage and they seemed appropriate; there was also a china shop down the road that used to have a window full of them. It began almost as a joke (the only 'art' we could afford) and sort of grew - long after I stopped buying them, friends would give us gaudy pots as gifts. 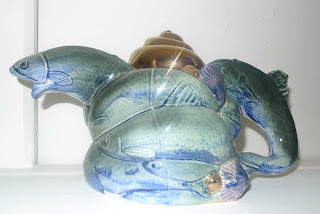 For the last fourteen years these have been in crates, so it was fun to take out a few for old times sake. I especially like the cactus with the vulture; my boys liked the fish, Jane remembered buying me the sailor. I have boxes of the them and suspect they might be worth putting on eBay. Or maybe a pub might want them - because to be honest, though I shall keep a few, I don't. 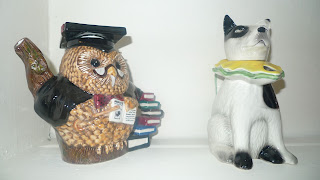 On the other hand, I might regret selling them. For if I ever become famous they could take on a whole new value. The artist, Andy Warhol, used to collect novelty cookie jars that he bought at flea markets. Their intrinsic value was a few dollars a piece and yet, after his death, his collection of 175 jars sold for $275,000. They are now on display in a corporate museum.

It is strange to think of the value of an object being attributed to its previous owner, especially if an identical item is widely available. The cookie jars, for example, were elevated to the status of art works merely because Warhol had chosen them. There was a similar furore a while ago when someone tried to sell an 'original fax' he had received from (I think) David Hockney. It lead to a debate on what constitutes original art.

I suspect many galleries were uncomfortable with the question. Most promote similar vagaries of value, foremost amongst them being the 'limited edition print'; in essence a lithograph or digital copy (intrinsic value a few pounds) with a pencil signature in the corner giving it a putative value of, say, £250 - or, depending on the signature, upwards to many thousands of pounds.

My tea pots will never be worth much, but they are not an entirely random collection. You might notice that the handles and spouts are always integral to the design, rather than simply stuck onto a fancy pot. The latter is the more common practice with novelty crockery and finding the integrated designs was always a challenge.

Now I've pointed that out you might notice it on other tea pots; perhaps also on cookie jars, cruet sets, mugs... even works of art.
Posted by The bike shed at 3:15 PM