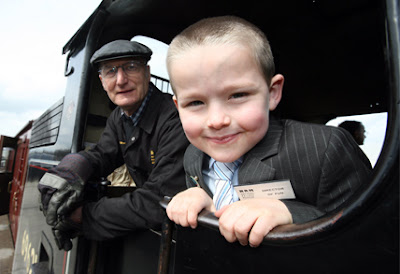 From time to time most regular bloggers will receive emails from marketing agencies offering to sponsor or place advertising on their blog. Occasionally I've been asked to do product reviews, including an offer from someone in Thailand who had an interesting take on what the bike shed was all about. I let all these pass.

But earlier this year I received an email from Nicky, who described herself as personal assistant to Sam Pointon, the Director of  Fun at the National railway Museum in York. Sam had a parcel he would like to send me if I would forward my address. The email looked genuine and I was intrigued, so I phoned the museum which confirmed they did indeed have such a director.

A week or so later my parcel arrived: it included a stick of rock, a signed photo and letter from Sam himself. Sam, who is seven years old, had been 'appointed' as Director of Fun to encourage parents and children to visit the museum by injecting some life into their marketing. His letter asked if I might encourage readers of my blog to join in.

What a great idea! And as a public relations exercise it has been a huge success. Sam's appointment was perfect for those light hearted news items and if you Google him you can see just how much coverage he has achieved. As my small contribution to his success I'm going to make an exception to my rule of not accepting sponsorship and encourage you to visit their website, if not the museum itself.

Of course, people warm to the idea of a six year old directing the campaigns of a stuffy old museum. But as I sat today conducting staff appraisals for the legal and corporate department that I lead, I did think I ought to embrace the idea more fully. My team are fantastic, but let's be honest, corporate governance isn't exactly the stuff of laughter, even if we do ditch our ties on a Friday. I asked for ideas.

Perhaps we could sign the share certificates with a child's handwriting? Maybe Dylan could stand in for me occasionally. Someone suggested inserting those smiley symbols into the annual report and accounts :-) Or in the present climate, more like :-(

Our ideas were pretty lame. I suspect we take comfort from our contracts and mergers, the piles of documents waiting to be to filed. What's more, the business I work for is deeply suspicious of anything less than formal; to receive a light hearted memo is rare, as if humour denotes a lack of commitment, or threatens to trivialise what is universally regarded as a 'serious business'. That's sad in its way.

On the other hand, I must be part of that culture too. For there is little that fills me with more dread than the thought of fully grown Director of Fun. I can picture them now, dreaming up with jolly ideas for corporate engagement: singalong-a-brainstorm, fancy dress Fridays, emails that open with a jingle, sponsoring people's blogs....

On reflection, I'll let that one pass as well.
Posted by The bike shed at 1:44 PM