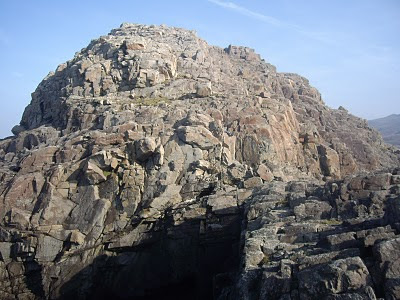 The picture above was taken at one of my favourite places. It is St David’s Head, the most westerly tip of Wales – beyond it are islands and the Irish Sea.
It is rare to photograph the Head from this direction; more usually, visitors stand on the summit, look over to Ramsey and South Bishop lighthouse. But on this occasion I had scrambled down the cliffs to the wave washed platform where the land and sea collide.
My son was with me when I took the picture – it was his thirteenth birthday and I’d taken a group of his friends for some air after they’d stayed for a sleepover party. One friend, George, didn’t fancy the scramble; if you look very closely you will see him perched to the right of the large boulders in the centre of the picture.
I have no idea how many times I have been to the Head – hundreds perhaps - and yet I never tire of it. This August I discovered a colony of Eggar moths flying over the bracken; I saw porpoises that day too. Last year, I camped on the soft turf below the summit when a gospel choir began singing from the rocks above me – they left at midnight, rejoicing with hallelujahs, as they filed down the narrow path by moonlight.
The National Trust owns the Head and surrounding land. Mostly, I think of the Trust owning old buildings and brown painting, but in fact it  owns large sections of wilderness, ensuring access for the general public. There is no charge to visit the Head, though I’d argue it is better entertainment than any theme park, especially if the sea is running high and the wind backing westerly, gale force 9.
The Head is one of my returning places: one of about six very particular landscapes which I visit time and again. I have never fully understood why I feel so drawn to them. But perhaps they are a reassuring constant, in an ever changing life.
My son is too old for sleepover parties (at least of the type he used to enjoy) ; George, who didn’t fancy the scramble, is now six feet tall; the gospel choir can only reminisce about the sunset and sprit of place. In contrast, the Head’s changes are imperceptible – the granite is virtually immortal, and the landmass moves at the rate our finger nails grow.
Dylan told me he wants to hunt the ghost of George. You know, he explained, the one in your picture, who sat on the rocks and was washed away when no one was looking. (He has a vivid imagination.) Would I take him there soon, he asked?
I have been away from Wales for only a week, and already I want to go back.
Posted by The bike shed at 9:22 AM

Labels: About me, NABLOPOMO, Returning