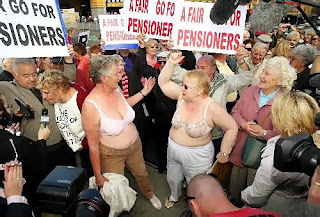 As we approach the general election, our local secondary school has organised a Question Time involving the constituency candidates. The school asked parents and pupils to submit questions, so I have suggested:
The under-funding of pensions has been described as ticking time-bomb. What proposals do you have to ensure the children leaving this school can retire at a reasonable age and free from poverty?
I am not hopeful. Pensions are hardly a popular subject, so it is likely the question will be shelved. And if not, any credible proposals will require prudence on a scale that modern politician simply can't contemplate.
And yet pensions are hugely important. They rank along with the health service and improved education as the greatest enhancement to the quality of life since the War. We are in grave danger of destroying that legacy, and largely because we are not prepared to face reality and take the necessary measures.
Indeed, pensions are the classic example of the modern politician's dilemma. The few who understand about pensions know it is an immense problem; they recognise we need to take action quickly; and they acknowledge the remedies will be unpopular. But here's the crunch - they also know the benefits won't come until they are long gone from office.
And so they ring their hands, whilst a generation of young people look forward to... well what?
In only twenty years we have witnessed the virtual destruction of the Company pension scheme; we have a grossly inequitable and unsustainable public sector liability; we have removed tax breaks for pension funds (technical but hugely important); and we have introduced a range of putative reforms that (with one notable exception) make matters worse.
Let me come clean here. I am a trustee of a very large pension fund - it has assets of over a billion pounds. For many of the scheme's members their share of the fund is their greatest asset. So I suppose I know a bit about pensions; and I am constantly reminded of how significant even relatively modest pensions can be to those reaching retirement. So why can't we sustain this?
The problems are many fold. We are living longer; there are more people reaching retirement; our funding is inadequate; the cost of housing discourages people from starting a pension; we don't trust the government; companies want to 'get the hell out' as quickly as possible; people don't understand how pensions work... I could go on.
But there is one significant factor to add. We have an absence of vision and political will to tackle the problem. It is negligence bordering on the shameful.
Okay, so I've defined the problem, but what are my solutions? I will come to those, but to before I do, I should be fair to the Government in one regard. The Pension Protection Fund (PPF) is good idea.
In a nutshell, the PPF steps in when a Company goes bankrupt and hasn't the assets to pay its pensioners in future. It provides protection up to about £30,000, which covers the vast majority of people - and it works like an insurance scheme, so it shouldn't be a drain on tax payers. It isn't perfect, but it's an example of using creative thinking to find an affordable solution.
What more do we need to do? The answer is lots - and here are my suggestions to fill the void.
VISION. We desperately need a vision for the pension system that people can understand and buy into. My vision is simple: young people starting work today should be able to fund a retirement pension of about half their salary. And we need a system which makes this possible for everyone - not just those who work for big companies or the public sector.
COMPULSORY SAVING. Pensions are one of the few areas (along with education ) where I think the State should make us do what is in our long term interest. Compulsory saving will not be popular, but it is necessary. It is also fair that everyone should make some contribution rather than rely on benefits.

As usual the Government has fudged it. From 2012 people will have to 'opt out' of pension schemes, but the rates they suggest are too low and will probably encourage companies to reduce their contributions. The system they propose is also inflexible.
GUARANTEED RETURNS. If we are going to compel people to save, we should give some guarantee of the return. With modern pensions you build up a 'pot' of money; when you come to retire you use that 'pot' to buy what is called an annuity. But the rates vary and they are very poor - typically you need £25,000 to buy a pension of £1000 a year.
I would like to see the introduction of a guaranteed annuity rate. It isn't beyond the skill of man to devise an affordable scheme which would offer people a fair rate for the first £10,000 of their pension - thereafter it could be left to the market.
Even better, would be 'pension bond' which payed an index linked return - and the capital returned to the person's estate (suitably taxed) on their death. I believe, more than any other measure, this would encourage people to buy into pensions
PUBLIC SECTOR REFORM. The inequity between public and private sector schemes is a gross injustice - and more importantly, it holds back pension reform. To be fair it has started, but not enough has been done.

All Public Sector schemes should be closed to further accrual - this means that the benefits people have 'earned' so far would be protected, but going forward they would have to join the same schemes that the vast majority of the public participate in.

And before anyone in the public sector cries foul, this is precisely what is happening to almost every company pension scheme - the sector that earns the wealth to fund our public services in the first place.
Frankly, we have no 'fund' to pay public sector pensions. If these pension were in the private sector they would be have to be bailed out by the PPF. In my view, there is a very strong case that the same rules should apply and pensions capped at £30,000. But are politicians ever going to do that? I doubt it; turkeys don't vote for Christmas!
SAFETY NET. To be fair, we do have a safety net in the state pension. But I would like to see an additional one - a guarantee that people's retirement savings will not be means tested to the point they become irrelevant, particularly for those on modest pensions.
That is enough for now.
My suggestions are probably not right, but at least they are an attempt to start a debate. None of them would be cost free - but we make choices and I don't believe any of them are beyond the means of what is still one of the world's largest economies. As we stand now, a generation of people are facing a very grim future.
Unless we act quickly, we will - in a very real sense - live to regret it.
Posted by The bike shed at 8:15 AM