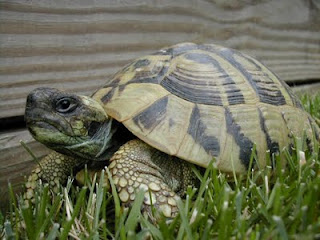 Jumbo, 1940 - 2005 (ish)
In my last post on pets I mentioned the sad tale of our much loved tortoise. We acquired Jumbo from a friend who emigrated to New Zealand; she in turn had inherited him from her Grandmother - we estimated that Jumbo was sixty years old.
Everyone loved Jumbo, even our neighbours, who turned out in force when he went on one of his great escapes - it became quite a social event; once it took us two days to find him. When we did, he was strolling merrily along the pavement towards Sainsbury's.
We built him a stronger and higher pen after that - but he foxed us by digging his way out! So I built him 'Colditz pen': wire mesh top, deep sides, overhangs for shade, reinforced corners. We even took it to Pembroke so he could be with us for the summer. But ultimately, it was this act of care - and his determined escapology - that was his undoing.
Not only did Jumbo escape from Colditz pen in Pembrokeshire, he also scaled a three foot stone wall, made his way through a tightly wired fence and headed for freedom in the fields beyond our house. Boy, did we search those fields! Day after week after month after year... For a while we thought he would be okay; we even reckoned he might have survived the winters. But when the pipes froze last January even the boys decided it was a bit much to ask.
Jane has carried the guilt for years - for it was she who moved the pen nearer to the wall before he escaped - and if you think I'm joking, I'm not; like I said, everyone loved Jumbo. For the last five years any mention of the word tortoise in our house has involved hushed tones and eyes to the floor.
Or at least, that was the case up to yesterday. Because, what else do you buy a forty eight year-old blogger for his birthday? I suppose it's obvious, when you think about it. 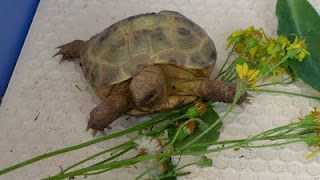 So welcome to Lilly, our new Horsfield Tortoise. She is all of four inches long, very feisty, a touch frisky and definitely well enclosed in her luxury home. In fact, I rather like her cage myself: sun lamp, shady area, plunge pool, green salad on demand...
I could get all philosophical, because I was pondering how odd it is to buy a pet that you know will probably out live you. Who, for instance, should I leave her to after I'm gone? They might emigrate and give her away to a friend, and then just think what might happen? But I won't go down that line, because it would be silly.
So I promise that's the end of my series on pets.
No more; absolutely no more, ever...I said, ever...
Posted by The bike shed at 8:18 PM