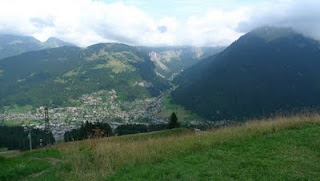 The Joux Plan is over the hils on the right
Yesterday I cycled the Col de Joux Plan. The road climbs from Morzine, past the chalets and farms on the lower slopes of the Pic de Nyon, before hairpining through dense pine forests to the summit at 1800 meters. The Col is a regular on the Tour de France, classified as haute category; we once stood on its slopes for six hours to watch Lance Armstrong cruise past us in seconds.
I last rode the Col with Michael, my middle son and a precociously talented cyclist. I remember advising him on his climbing technique, reminding him to save his energy, to drink and to eat regularly. He paid little regard, and as the road steepened, he gradually pulled away. All my experience counted for nothing against this slim boy, cruising each harpin with effortless grace. By the time I reached the top he'd been resting for fifteen minutes.
I took a photo of him by the summit plaque before we began the descent (I have a copy on my office wall). 'Be careful,' I warned him, 'and don't go too far ahead.' He didn't want to listen; he was sick of me telling him how to ride, he said - he wanted to do it his way.
And I remember, as I watched his blue jersey streak ahead, being suddenly overwhelmed with fear. Not of him crashing - he was too good a rider to worry about that - but of losing him. Quite to what I was losing him, I didn't know. But I was desperate to catch him; descending as fast as I dared, each turn more reckless than the next - and all the while the wind drying my eyes. 'Not yet,' I kept telling myself, 'Not quite yet...'
That was three years ago. Michael raced over forty times that summer and only once came second; by the end of the season he topped the national rankings. Cycling was a huge part of our lives then, but from that day onward he increasingly rode on his own terms. He's more relaxed now, and interested in other things besides bikes, (a good thing too) but he remains a wonderful rider.
Climbing the Col yesterday we rode our mountain bikes; big lumbering things, not suited for taking hairpins with effortless grace. I am fitter too and could stay with him longer; he grumbled about the heat, which made me smile. But by the second half of the climb he had pulled away. Groups of tanned riders passed me with ease, but I watched them stamping on their pedals to catch the young boy up the road. For despite his talent, and the three summers since we rode here, he is still a young boy in body and at heart.
I reached the summit only five minutes behind - progress of sorts. No photos this time; he dropped over the lip and within seconds was two hairpins ahead. No risk taking too; I'd go down at my own pace.
He was waiting for me at the half-way chalet. I snatched at my brakes and almost skidded off the road. 'Are you all right?' he asked, passing me a water bottle and a handful of Haribo.
'I'm fine,' I replied. 'Just doing it my way.'
'That's cool,' he said. 'For a moment, I was worried I'd lost you.'
Posted by The bike shed at 8:49 PM