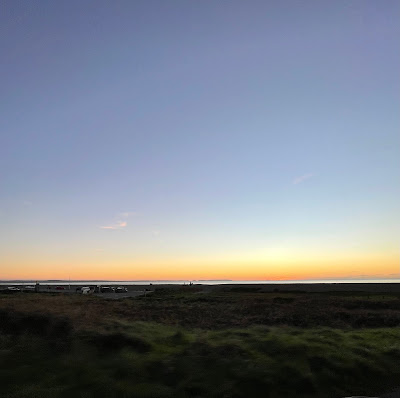 Wide horizons for the new year

In the days when my children were toddlers, I remember railing against the limitations that little ones invariably impose. Let’s go to the beach this morning I’d say, then take a walk in the afternoon, and maybe eat out in the evening… I wanted to cram our holidays with activity; show that planning and persistence were all that was needed… It invariably ended in tears.

And I remember also, one rainy day when the kids were grizzling and my good friend pulling me quietly aside to say, ‘You know, Mark, it’s okay take a breather.’ His mantra, borne of raising two boisterous boys, was ‘do one thing well – and be happy it’s enough.’

It took me years to see the wisdom in that advice, and even longer to learn that slowing down wasn’t the same as giving in. Even now, supposedly semi-retired, I work every day and have a diary that’s too full to fit in all I’d like. There’ll always be a part of me that wants to push at the boundaries.

But I’ve learned too, that in the mountains especially, there are times when we must hold back. The temptation to press on can be lethal if taken too far, as can ignoring the signs of fatigue or over estimating the ability of others. Perhaps worst of all, is the urge to snatch at chances for fear they’ll not come again. Sadly, I’ve seen all too closely the dark side of those desires.

Which I’m aware is a rather down-beat opener to January.

But I’m conscious also (as I write this in late December) that this holiday season will see millions returning to the Alps for the first time since the pandemic. The resorts will be buzzing and the temptation to hit the slopes hard irrepressible for some—me included. My children — all adults now — will be with us at our house in France, together with partners and friends. How lucky are we to have this precious time together?

Which is why I’m planning to treasure it. And to do so by savouring ‘each’ rather than ‘every’ possible moment. The same goes for my plans this coming year. I want to walk the Tour du Mont Blanc, to climb a dozen classic routes, to get back in my kayak, run ten miles every week… but I know that I can’t.

So instead, I’m going to choose one of those and be content. Or more likely – for old habits die hard — one thing in its turn. This year, I celebrated my sixty-first birthday and am more keenly aware than ever, that despite life’s dandelion clock, there’s still abundant joy to be had in the mountains… so long as we slow down enough to enjoy it.

Wishing you a wonderful year.