The traces we leave... 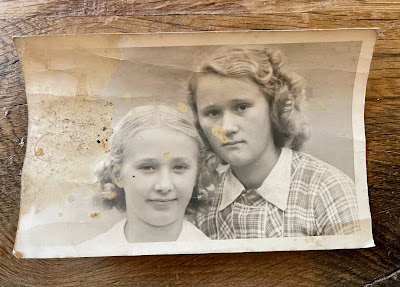 Earlier this week I disposed of an old bedside cabinet at our house in France. It was one of those items you feel guilty for dumping, but deep down know the charity shop won't want either. For the last two years, it's stood by our front door so the postman can leave small parcels. When the mice took up residence, it was time to let go.

But as is the way here, recycling it meant removing the marble top, separating the lining from its outer casing, checking each section for nails ... And in so doing, discovering a photograph that, decades earlier, someone had taped to the underside of a drawer.  An image of two girls looking into a lens saw its first light of day for lord knows how long.

Who'd put it there I wondered?  The faces suggest they are sisters, but whose daughters or granddaughters might they be? And why paste their picture where it wouldn't be seen?  Are they still with us... or gone now, like the cabinet that housed the fragment of their past?

I guess we could weave all manner of stories from such flimsy threads. But that's what novelists do, and I'm not one of those.

So instead I pondered the traces we leave...

My neighbour is a mason who restores historic buildings — every time I see him at work I'm in awe. Like many craftsmen, he brushes off praise. But if you asked, he'd explain the tradition of mason's marks and how to find 'signatures' in the stone of cathedral walls. His imprint will endure for generations.

Many years ago my mother wrote a song for her primary school class. One of my earliest memories is her figuring the tune on chime bars at our home. It's since been published in dozens of hymn books and is widely recorded around the world. By the time she dies, how many hundreds of thousands will have sung 'I listen and I listen'?  No doubt, we will play it at her funeral.

And what will I leave?

Some writing perhaps, at least for as long as it lasts; there are two obscure rock climbs I've given a name to; perhaps someone will keep one of my paintings...  Jane and I like to think that every house we've owned has benefited from our stewardship. With luck, there'll be some inheritance...

Very little I hope. For legacies are not the purpose of life or indeed the best measure of our contributions. There's value in making a difference now: in helping and healing, in supporting and providing; in simply making ends meet so that those we love can flourish. In an age when we're so driven to 'succeed', some say we should live more in the moment.

Though by historical standards, we generally do. I read somewhere that very few of us know the forenames of our great grandparents; after three generations we're lost to memory.  That seems to me, no bad thing, for I've always thought the veneration of ancestors to be misplaced. If I could visit any time in history, I'd choose the future, not the past.

As I write the conclusion to this post, I'm struck that my doing so has been delayed.

Because for a week I lost the picture of the girls, absentmindedly putting it down to watch the contrails in the sky across our valley.  Had I not tidied up, it would have curled and faded in the sunlight that streams through the window. Every day here, the planes go back and forth...  a web of slipstreams that momentarily sparkle, then fade to oblivion.