My piece of Heaven 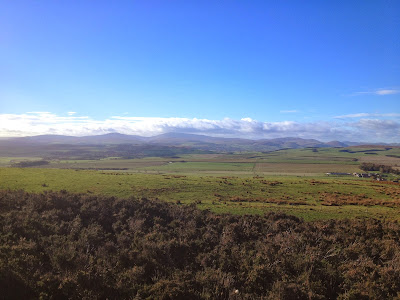 On Tuesday morning, arriving at the Lindisfarne causeway, I realised I’d miscalculated the tides. The crossing to Holy Island wouldn’t be clear till midday; we had an hour or two to kill.

No matter, I said to Dylan, we can go to the best palace ever, instead!

For thirty years, if anyone has asked me about visiting Northumberland I’ve a list of recommendations to hand. And amongst the tourist highlights (Hadrian’s Wall; the Simonside Hills; Bamburgh Castle) I always include one or two personal favourites. You’ll not find these in a guidebook, I say - but trust me; make the effort, and they’ll stay with you for life. 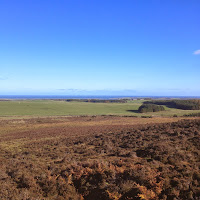 The top of that secondary list is Bowden Doors on Belford Moor. It’s a high sandstone crag on a windswept hill halfway between the coast and the Cheviot. To reach it you take the road toward Wooler, park by a gate on the summit, and head north across a sunken field for what appears to be a jumble of stones.

By this time, trust in my recommendation is probably wearing thin. But round the corner of those first rocks and you’ll see the point. Bowden Doors is the best and best-situated sandstone crag in England; rock climbers know it intimately and the likelihood is there’ll be some scaling its cracks and walls. At its far end is the ‘wave’ a gobsmacking geological feature that’s worth the visit in itself. 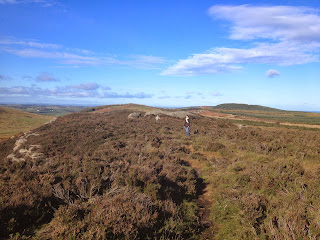 But Belford Moor is much more than a climbers’ playground.

This landscape is where the Vikings first came to Britain; it’s where St Cuthbert’s body was hidden for seven years; long before that it’s where Neolithic peoples carved the rocks with cups and rings. It’s where hares and geese and ravens have been coming for millennia.

As we clambered to the top of the rocks the panorama of the coast and the cheviot opened before us. I reminded Jane that when the time comes it is here that I’d like my ashes scattered. Really, she scowled, after all this time – and not in Wales?

You could do half and half, I joked.

But in truth, this is my piece of Heaven. It is where I first climbed; where I came of age; where I learned the healing power of landscape. Despite long absences in recent years, it remains my favourite place in all the world. The view, the sounds, the smell and feel of the air, are imprinted on my soul. 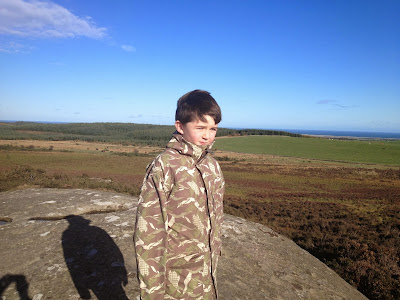 As we left, the clouds were scudding from the west, dark shadows on the heather and bracken. Dylan was a little behind us, standing on a rounded boulder, screaming my name into the wind. I waited for him and we walked the last yards together - a vista of castles and coast unbroken below us.

Only when we got back to the car did I see the warning of an impending horror...