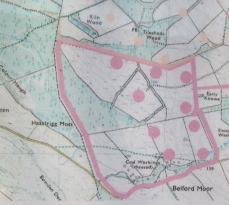 Last Tuesday  I wrote an email to my friend. It read: Please God, they say no to this one.

I attached the same photo as the one above, pressed send and could feel my body welling with anger. Eight words were all I could muster without lapsing into expletives.

But I'm going to now - of all the places, in all the world,  I'd rather there wasn't a fuck-ugly windfarm it would be here.  I'm still so drunk with rage at the prospect, that this post is going to be difficult to control.

The place of course, is Belford Moor - the piece of heaven about which I wrote yesterday. As we were driving down the hill I'd noticed a yellow sign on the fence below the rise: No turbines - object now!  I could have been sick at the wheel.

What are we doing to our landscape for goodness sake?

It seems we're seriously considering nine massive turbines that will bespoil one of the most precious landscapes in Northumberland. They will destroy the moor, ruin the skyline; be visible for miles and miles and miles. What's more, we'll subsidise this destruction beyond compare, ensuring a massive profit for the generating companies, who frankly don't give a toss for the place and its importance as part of a wider landscape.

And in return for this destruction?

Let me put this as fairly as I can...

Okay, that's a one-sided view - but then you see these darn turbines are like that.  Because it takes just one decision to ruin the landscape for a generation - and we have one chance to to save it.

I've been clear many times on this blog that I hate windfarms with a passion.

But this time it is deeply personal - for the first time in my life, I think I can truly understand how the road protesters at Newbury felt, how the peace camp campaigners at Greenham Common felt, how those on the Kinder Trespass felt...

The picture above is not an artificial representation - it is the already devastating impact we've sanctioned on the area to the south of Belford Moor.

Next time you look at a windfarm imagine it being in your most precious place. If you're one of those many bloggers with a picture of a personal landscape on your homepage, imagine it covered in turbines. If you're visiting the countryside this week - imagine it as a semi-industrial site with access roads and restrictions and whirling blades...

And if none of that worries you, then you're made of different stuff to me.

Please God, they say no to this one.
Posted by The bike shed at 6:00 PM