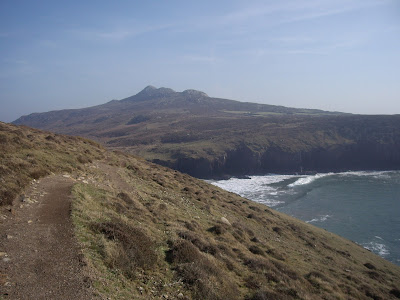 An unlikely place to see a badger

Sometimes, if we see the most ordinary of things in an unexpected context it can jolt our senses. I was once transfixed for half the train journey to London by a woman flossing her teeth – she nonchalantly rinsed her mouth with spring water, spitting into a plastic bag whilst chatting to her friends! Another time - again on a train -  I was travelling through Germany and I remember being shocked by the workmen drinking steins of lager with their breakfast.

All of which is a contrived introduction to the unexpected context in which I last saw a badger.

It was shuffling across the scrubby cliffs on the approach to St David’s Head. I was there at midday and had passed Porth Melgan beach when I saw it - in truth the badger wasn’t so much shuffling as scurrying, covering the ground at a pace I’ve not seen one travel before.

Badgers are relatively common in Pembrokeshire. There are numerous setts in the lanes near my house, though a good sighting is still infrequent enough to make a comment if not exactly stop the car. Most times we spot a badger it’s caught in the headlights as we drive home – if we see one in the daylight it’s invariably road-kill.

One spring a young cub took to visiting our garden and we’d peek between the curtains to watch it sniffing for worms on the lawn. Lit by the glow of the street lamps it reminded me of those nature watch programmes that set up hidden cameras to film cubs feeding at night - badgers were considered special then, and in many ways they still are, though recent increases in numbers have led to fears of a link to bovine TB, and the threat of culls.

I don’t know about the science but I find the prospect of culls rather sad. We have so few wild mammals and these sturdy creatures seem to me to be symbolic of a widely held feeling that our countryside shouldn’t all be lost to industrial agriculture. How anyone could ever find sport in baiting them is beyond me – thankfully that’s been illegal for a long time.

Watching the badger scurry away, it looked rather comical – hunched and dwarfish, stubby legs racing to catch up with an elongated snout.  I learned recently that badgers are related to weasels. I’d not seen the resemblance before, but there's a vague familiarity in the head shape, though the gait of the one I saw didn’t suggest the cunning we associate with its smaller cousins.

Badgers have long been anthropomorphised in stories, often as trusty stalwarts, as in The Wind in the Willows. Ironically, in that book, the weasels and stoats are the bad guys, ending up on the wrong end of Badger’s cudgel!  But if I were writing in that fashion, my badgers would be rugby forwards: a touch dim on first impression, but single minded and built for their task – absolutely necessary too, for all that we don't notice or appreciate them enough.

Returning to my encounter, it had never occurred to me to look for badgers on the coast path. I suspect the one I saw had wandered a little too far for comfort, hence its haste to reach the flatter ground. But why wouldn’t they be there?  Beyond the head is a wide expanse of moor, plenty of places for a deep sett, and a deal less interference from farmers or car headlights.

The strange thing about these encounters is how they affect our returning.  Every time I pass through Didcott station I remember that woman flossing her teeth; I still have an entirely unreasonable preconception that all German workmen drink beer with their breakfast! And the next time I visit St David’s Head I shall look for badgers on the off chance – I doubt I’ll see any, but it won’t really matter. Sometimes, the knowledge they are there is enough.
Posted by The bike shed at 10:58 AM