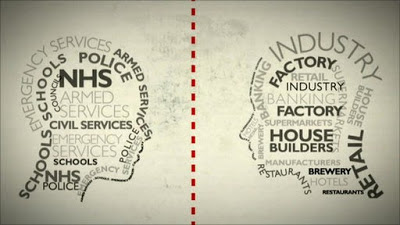 No review of UK pensions can be complete without a discussion of the divide between the private and public sector. Unfortunately, that word 'discussion' is pretty rare in practice - instead we have, on the one hand, public sector unions screaming hysterically at any suggestion of change, and on the other, an ill-informed press, printing headlines that border on scaremongering.

The truth is somewhere between the two, and frankly, there isn't space here for detailed financial analysis.  But what is undeniable is that the public sector has seen comparatively little change over the last twenty years.  Meanwhile, as I described in my last post, successive governments have stood by and watched the wholesale dismantling of comparable schemes in the private sector.

The end result is what's been described as a pensions apartheid - with the vast majority of citizens now dependent on self-invested funds (known as Direct Contribution schemes), whilst workers in the public sector continue to enjoy what are stratospherically better terms, underpinned by the taxpayer, inflation linked, and often with early retirement thrown in...

To understand why this disparity has come about, it's important first to return to the old company schemes and specifically, the way they were funded.

In simple terms, company schemes were financed by contributions from members and the sponsoring employer. Over many years these contributions grow and are invested, typically in stocks and bonds, with the proceeds paying for the pensions of members.  There are strict rules to ensure the funds have enough cash and investments to cover the projected future payments.  And CRUCIALLY, if there is a shortfall, the employer has to make up the difference!

What happened in the private sector - putting the whole issue in a nutshell - is that companies realised they could no longer afford to fund these schemes. As the population began to age the shortfalls (known as pension deficits) were becoming enormous - in many cases bigger than than the entire value of the sponsoring company.  Over a few years, virtually every large UK company closed their final salary schemes.

It's important also to understand - despite the hysteria of the TUC and the conspiracy theorists -  that most of them did this with a heavy heart. In the vast majority of cases, those making the decision would be directly affected and there was deep concern over the impact on long serving employees. But ultimately, it was not in anyone's interest to continue with what had become unsustainable schemes.

Last week I read an otherwise rather good paper which argued that public sector pensions should not be changed - two wrongs, it said, don't make a right!  But in this regard, the paper is missing the point - the companies were not 'wrong' to make these decisions; to have continued would  have bankrupted them and left pensioners in the lurch. Sure, there were some which took advantage, some were less scrupulous and generous than others - but the basic point is undeniable: companies could no longer afford to fund pensions schemes to the level we had all become used to!

So why was so little done in the public sector?

Well, here we have to get into generalities. But the key reason is that the majority of public sector schemes do not have accumulated funds - instead, the member contributions go directly to the government and the taxpayer picks up all responsibility for future payments.  There are not the same rules for funding; not the same rules for how early retirement should be accounted for; not the same prospect of bankruptcy - in short, there is not the same incentive to change.

The result is an almost inestimable deficit, which continues to grow, and though not included in our calculation of public debt, it will soon (at a low-end estimate) cost every single taxpayer £1200 p.a.! In my last post, I described certain aspects of public sector pensions as 'verging on the immoral' -  it is largely this deficit I had in mind. The failure of successive governments (and the recent Hutton Report) to deal with this, is something future generations will pay very dearly for indeed. We are talking about trillions and trillions of pounds.

The trouble though, with any debate on public sector pensions is it depends where you stand - not surprisingly everyone I've met who works in the sector will defend their pension vigorously, but then they're hardly objective are they!  I believe I've demonstrated over many previous posts that I care deeply about pensions, that I want to see a better system in place for my children, that we lack vision and courage - that we have to stop the rot. And yet even I can't accept that what we have in the public sector is any way fair or good for society as a whole.

It's no doubt possible to present the figures above in a different way, to argue that we need to avoid a 'race for the bottom', to claim that certain parts of the public sector (the armed forces for example) are a special case. But ultimately, we have to answer one single question - why should the public sector have substantially better arrangements than that which the government deems right for everyone else?

And the honest truth is I can't answer that with any rigour.

The Government has recently introduced a quasi compulsory pension plan known as 'auto-enrolment' - it has been lauded as a scheme that will ensure every worker has a decent pension. And to give you some idea, an average wage earner participating in that scheme for their entire working life might just, if they are lucky, accrue a pension equivalent to 25% of their wage - almost certainly not index-linked, and extremely limited in its guarantees and other benefits. A public sector worker on the same wage and working over the same period would enjoy a pension of upwards of 50%, index linked, spouses pensions, etc, etc.

I could go on about the unfairness of public sector pensions.  Why, when the minimum pension age was raised to 55, was the Police Service 'red circled' to allow their pensions to be taken from as low as age 48?  Why were so many public sector workers (estimated at millions of retirees) given enhanced packages that would never be justified in the commercial sector? Why do those 'funded schemes' such as exist in local government, not have to adhere to the same recovery schemes as the private sector?

My own family reading this blog may wince (they include three teachers, all early retired; one policeman soon to retire; my brothers are a teacher and a nurse; my late father was a policeman retired age 50).  I'm not saying they don't deserve their pensions - but I am saying they would never have got them in the private sector today, and that at some point this disparity has to stop. For my close family also has eight children and young adults - we have to also think about them.

Of course, it could be argued (to some extent it was by Lord Hutton) that the State should set an example - and that by doing so it encourages best practice in the commercial sector. If I thought this were true, I'd support it - but, sadly, there is not a scrap of evidence to show that companies will change course.  What's more, the recent Government changes to pension funding makes it almost impossible for them to do so. The truth is, the old company schemes are dead and they will not be replaced. And this is why I passionately believe public sector pensions must change too. For only then will we see the creativity and vision needed to improve pensions for everyone.

If you want me to pin my colours to the mast, I'd like to see a system that is broadly universal - that makes saving compulsory regardless of earnings - that pays out near to 35% of salary by retirement age - that is capped at roughly £50,000 p.a. so very high earners can't use it as tax haven - that is index-linked and not eroded by means tested benefits - that can be calculated with a high degree of certainty - that can be bequeathed in the event of deaths.  In other words, a system that lies somewhere between the public and private sector norms - a half way house that is fairer for everyone.

All that is possible, but only if we pool our resources and not if we continue to over-egg schemes for 20% of the population whilst constantly cutting those which apply to the rest. It is not a matter of reducing what we pay for pensions as a whole, nor is it a matter of racing to the bottom - rather, it is a matter of paying more ( a great deal more if necessary)  but spreading that cost and its benefits more evenly.

And above all of this, there is simply a question about the kind of society we want to live in. I want one that offers the prospect of a decent retirement for all, not one that's riven by envy and division in old age  - nor, at the other end of life's spectrum, one in which young people are forced to make career choices based on a fear of old age.  I want one that is shaped by neither hysteria nor scaremongering, but by an understanding that whilst we need to make some unpalatable changes, those are best achieved if apply the same rules to all.

I rest my case.

I wait for comments with interest and can almost feel the icy blast of those in the public sector - my challenge to them is to answer the question I posed in italics many paragraphs above. We can all contrive to defend our self-interest - the harder task is to show, in the greater scheme of things, how that self-interest sits comfortably with the legitimate interests of others.
Posted by The bike shed at 9:05 PM