The trouble with pensions - part 1 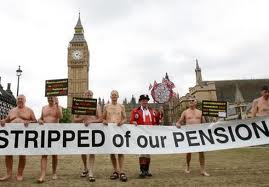 A couple of posts previous to this, Mark in Mayenne commented that he could weep for what has happened to education in Britain. I'm not so sure, but I could certainly weep for what's happened to our pension system. In a little under twenty years we've destroyed (or at least allowed to die) one the most tangible aspects of social progress since the creation of the Welfare State - the prospect of a decent and secure retirement.

The reasons for this are largely the preserve of experts. Of the general population, even the well educated and financially savvy don't understand pensions; most folks are simply bemused, confused and mistrusting.  Younger people have all but given up hope - they'll 'work till they drop they' say, in a tone that's half humour and half resentment.

I don't blame them.

Successive Governments have made the system so complex it is now way beyond the layman. The recent announcement of a 'new simplified state pension' is a classic example of political spin sneaking through a measure through which ought to have caused an outcry.  In case you didn't know, it's effect for the vast majority will be they work longer, receive less and have fewer means to provide a cushion should they wish to save for it.

It's true that pensions are a complex business - and there's no single reason for the demise of the UK system. We have an ageing population; successive governments (and New Labour in particular) have made some stupendously bad decisions on the tax treatment of pension funds; politicians have run scared of tough decisions for fear of electoral backlash...  I could go on.

But instead I want to give you a slightly different perspective. It comes from years of being a trustee of two very large funds, and many more spent caring about and planning for retirement. I am, perhaps sadly, one of the few who (broadly) understands pensions; who takes a very close interest in how they are structured, how policy affects them, and how in turn it will impact future generations.

I'm going to offer you three very different reasons for their demise.

The first is you and me.  I don't mean that literally, but if the changes in pension provision have shown one thing, it is that if you require people to take personal responsibility, huge numbers will choose to spend today rather than save for tomorrow.

To some extent this is a result of confusion and mistrust - the reason so many people joined the old company salary schemes is that they were very simple to understand - but it is also because our culture and attitude has changed; I'd argue for the worse.

I've long ago lost count of the number of middle earning people who tell me they can't afford to save for a personal pension. The operative phrase here is 'middle earning'. There has always been a section of society that struggles to afford a private pension, but middle earners (austerity aside) are rarely in that bracket. Of course, I understand they don't use the phrase 'afford' in an absolute sense, but as a general population we continue to make active choices to spend on houses, cars holidays, whatever...  rather than save for retirement.

And it's important to recognise that we've been under-saving for twenty years - not just in times of austerity; indeed, the supposed boom saw some of the biggest reductions in pension provision. In part, this was because of a widely adopted mantra that 'my house will be my pension' - but it was also, frankly, because attitudes to saving for retirement changed.

As a whole, you'll pick up that I regard the demise of pensions as a national disgrace - but at the risk of some controversy, if there is one section of society I will have little sympathy for in years to come, it is those who clearly have the means to save but demonstrably choose not to.

The second is public sector pensions, or rather the failure of consecutive governments to tackle the issue. It might seem counter to my position to say that public sector pensions are unsustainable  - I'd go so far as to say they are verging on the immoral - but in fact I believe they are central to the lack of progress in the private sector.

As a rule, I don't like conspiracy theories, but my deeply held belief is that one of the chief reasons the private sector system has been allowed to die, is that those in power have not been affected. Public sector pensions are such a huge issue that I plan to discuss them separately in a follow up post (can you wait) - but for now I would just register that until we are all in the same boat, there will not be the political drive and thought leadership necessary for our rescue.

Which brings me neatly to the third reason - that there is no political vision for retirement.  The policy makers have come to see pensions entirely in terms of cost and risk and future debt projections; they run scared from the figures and even more so from the electorate.  No politician wants to lose votes for a decision that will bring benefit after they've gone - and this is perhaps the biggest trouble of all.

But if ever there were a case for re-framing a debate, this is surely it. I happen to be passionate about pensions, but it's not the financial instruments I care about; it is ensuring I and my family - and millions of others like us - have a secure and fulfilling retirement.

Everyone understands the days of pay-offs and feet-up in your fifties have all but gone - but that doesn't mean we can't still have an ambitious political vision which, for example: recognises that winding down from full-time employment is going to be necessary for millions; incentivises companies to offer more than minimum pension contributions; legislates for more flexible and age appropriate employment contracts for workers who've given years of service; acknowledges a better balance between the private and public sector would be a social good.

I could easily add to that list - and perhaps I should.  But the tragedy is that our politicians do not do it for me. Most don't understand, many don't much care, some are willfully blind. It is an absolute tragedy and a one we all will pay for.

As I said at the start, I really could weep.
Posted by The bike shed at 7:16 PM