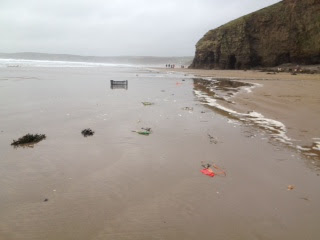 I've not known a wetter Christmas. All week the rain has blurred our windows; driven by the Atlantic currents it beats on the walls, the roof tiles, the doorsteps - even the gutters in our village are bubbling, a muddy stream running parallel to the verge. On Christmas Eve I watched a line of empty beer cans floating past the farm at the head of the road.

We often tell visitors not to worry about the weather - there's a pleasure, we say, walking the coast in a gale. But this rain is dank and insistent - there's no thrill in it, just a constant drubbing, the ground sucking at your wellies if you venture off road. In the field across from our house, the starlings have sheltered all week in the hedge... waiting, like us, for any break in the clouds.

One came on Wednesday - an hour or so between fronts, the wind easing and the first hint of sun in days. The boys were happy to stay steaming inside, but Jane and I grabbed our coats and joined the dog-walkers on Newgale sands. There are few better storm beaches in Wales.

As we parked the car Jane commented on the plastic strewn along the high-water mark. It was horrid, she said, and I agreed, adding that it's bad for the wildlife as well as being ugly. And yet, as we set off, I secretly thrilled at what I might find - for there's a part of me that's always excited at the prospect of beachcombing.

I can recall going to the beach as a child, and my parents insisting on walking the tide mark.  Old pop bottles would be collected for the sixpence return fee, driftwood gathered for a fire; once (on Seaton Sluice beach) we came across a hoard of beeswax. My mother collected great lumps of it to make candles - she carved a horses head sculpture from it too.  Funny the things we remember?

I'm not alone in seeing the possibilities. The Cornish artist Peter Lanyon used to make constructions from objects he found on the beach. Using these as prompts to memory, he painted some of the best abstract landscapes of the Twentieth Century. Poets seem to respond to it too - though often I'm suspicious - their narratives and metaphors, (almost always a variation on 'washed up') a little too obvious, for my liking. 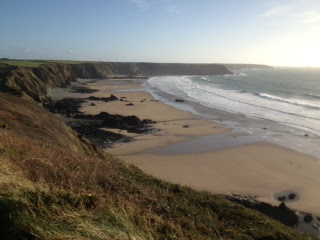 On Thursday there was a longer break in the clouds - this time we went to Marloes, another fine storm beach, and is it turned out, with an even greater collection of rubbish under its cliffs. There were nets, and piles of wood, a fishing boat rudder, some buoys and a lobster pot float (now in my garden, thank you). I especially liked a jagged crate, half-buried in the sand and resembling a shark's jaw.  Strangely there was no weed, the beach seemingly scoured of any large organic matter.

Jane is right of course, about the detritus. It's troubling how much is now floating in our seas - there are whole island made entirely of trash where he Earth's major currents meet - one, between Hawaii and California is known as the Great Pacific Garbage Patch!  And she's right it's pretty disgusting - much of what's been washed up is simply discarded netting, plastic boxes and fishing buckets.  Not that it's any better (though certainly, it's more comical), a few years ago there was a huge container of sun cream washed ashore - the following spring every car boot sale for miles around had a stall selling Spanish sun lotion. 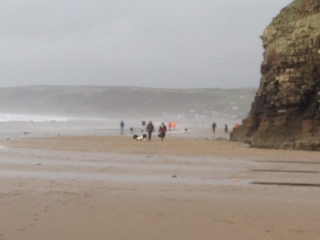 At both Newgale and Marloes, we added a pile of netting to the waste bins - a small contribution to the clean up. In truth it will make little difference, the sea will carry most of the trash away - only to bring much of it back next year. And when it does, I'll have that strange dual feeling - a logical empathy with Jane's view that it's horrid - and a childish thrill that maybe, just maybe, there'll be some treasure to be found.
Posted by The bike shed at 10:21 PM