In praise of parks and their keepers 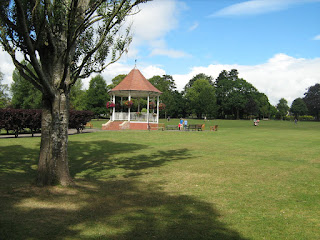 Opposite my house in Wiltshire is a large Edwardian park. Within its steel fenced boundary is an arboretum of mature trees which act as backdrop to my garden. There's also a large playing field,  three tennis courts, a jogging trail, bowling green, toddler's playground, snack-shack and even a bandstand which hosts Sunday concerts throughout the summer.

John Coles Park is then, a quintessential civic amenity: accessible, free to use and beyond what any individual could afford or would want to maintain. It's one of the chief delights of living where I do. And yet before I moved to this side of town I don't think I'd walked there more than twice in fifteen years.

The reason is I was sniffy about public spaces. They were second rate: not the same as 'proper landscape', cultivated and false - and frankly, full of lads in hoodies playing keepy-uppy with empty cider cans. Given the choice I'd head to the hills or, more locally, the woods at Castle Combe; I'd seek out true nature and preferably not to have to share it with others.

There is still some truth in that attitude - parks are not the same as the fells; they can't compare to Bamburgh beach on a crisp winter's morning; there isn't the view, the space, the sense of perspective that wild places offer. And many are spoiled by yobs and winos - there's one the other side of town that I'd not walk through at night.

But I've come to learn that at that their best they are worthy in their own terms.

Last Sunday the clouds parted for a couple of hours and our park had well over a hundred visitors.  There were folk walking their dogs, kids on bikes (and scooters - oh, so many scooters), some playing tennis, a chap on power-risers, another sprinting between the trees.  There were families and couples and groups of teenagers - I'd reckon the age range spanned eighty years. We had a coffee at the snack bar and Dylan defied the seasons by demanding a tub of ice cream.

And I've come to realise how important these facilities are to the community. Not everyone has access to those hills and woods I casually assume are available to all. And those who do, might justifiably not have the time or inclination (or cash) to travel and sort maps (let alone the gear) only to drag their kids through an unfamiliar landscape. Wilderness is an acquired taste; it requires knowledge and skills that aren't gained overnight, let alone a break in the clouds.

An irony perhaps is that our park is the best open space around here, precisely because it is closely managed. The gates close at dusk; there are uniformed keepers, the litter is picked; offensive youths are asked to leave. That's not to say it's policed, nor is it tended like a National Trust property - but there's sufficient control to 'keep it tidy' as they would say in Wales. I often think of it as an example of Liberalism in action -  we are free to do as we please - so far as it doesn't stop others doing the same. 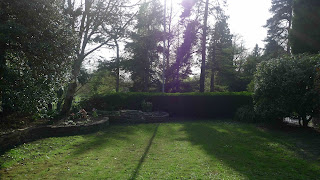 The park from my garden

Of course, the presence of careful (if understated) management is essential to our so-called wilderness too. I might fantasise about an unspoiled landscape offering free and open access, but the reality is that without the management of bodies such as the national park authorities (and the aforementioned National Trust) there would be precious little of it. And it's not just yobs or selfish landowners who'd be the threat- take a look at, say, Keswick High Street or Bourton on the Water, to see how rampant commercialism can destroy the character of a place.

It's 11.00am and I need to finish this blog.  The sun has come out and the frost is finally melting. But it's too cold to cycle and the big boys are revising; Dylan is playing video games and needs some air; Jane has plans this afternoon.  I wonder where we can go for an hour or so?
Posted by The bike shed at 11:15 AM