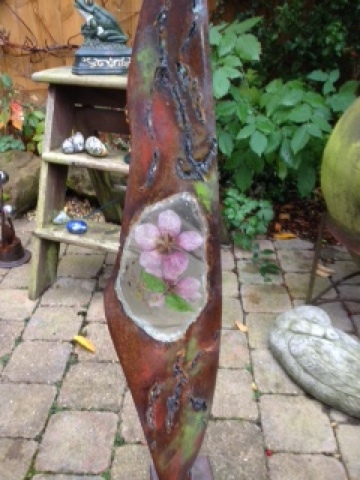 It's interesting what happens when people with a shared passion meet. I've just returned from a conference involving, writers, scientists, ecologists, painters, musicians, journalists, outdoor enthusiasts... The uniting force was a love of nature, and over two days we explored concerns and celebrated successes across topics as diverse as the decline of cuckoos and increase in pesticides (sadly these too, are related).

For all it was a multi-discipline event, what stood out for me was a sense that although our mediums and working methods may be radically different, our responses to the natural world, and what's happening to it, were remarkably similar.

My friend Jim Perrin gave a short address in which he argued that 'rapture' and a sense of wonder were both essential to our appreciation of the natural world - and that it was an artist's duty to communicate those feelings as surely as it is a scientist's to order and correlate observations in a way that gives meaning and insight to chaos.

I think Jim is right - but it's easier to say than to do. For using words runs the risk that we don't have enough, that they are inadequate; that our true responses are beyond literal translation. And communicating through paint or sculpture has the opposite but equally problematic restrictor - that the silent language of visual arts is so easily misunderstood or misrepresented.

The hope in both cases is that if our response is 'true', then no matter how crudely put (in words or paint or stone...) its message will be clear and its authenticity obvious. We see this quality in the work of children, which at its best is honest and direct, no matter its lack of sophistication. What's more, it is usually obvious when children are faking it, because their words resort to cliche and their pictures to caricature.

Unfortunately, we are more easily fooled by the sophistry and, at times, plain fakery of adults. We need a sensitive antenna to detect those artists whose modus operandi is living out a fiction, designed to manipulate our emotions. I've seen this on the blogosphere as much as in books or in painting - at times outrageously so.

The good news is that genuine painters and writers and sculptors are out there - and often they are modest and welcoming. Although it's a wild generalisation, I find those with the least need for public acclaim to be those who work with greatest integrity (by which I mean truth to themselves and their ideas) - the most prepared to risk failure and the possibility of ridicule which comes with trying something new.

On Thursday I had a reminder of this when I called at the house of long standing family friend, Jack Kirk. Jack is a sculptor, specialising in abstract constructions in metal and glass and I was keen to have some of his pieces for my garden. Interestingly he began sculpting in his sixties; after a long career in business, he studied for a fine art degree and reinvented his outlook on the world.

Jack's work is simple in construction and very beautiful in parts - not so in every aspect, but then you see, that makes it truer. His pieces need to weather, to live outside - they are a response to nature, and best seen amongst it. I was taken by the simplicity of his tools and working methods, and also the language of his descriptions, of what he was trying to do. Or rather, now I think of it, the absence of over sophistication, the plainness of his motives.

After loading my car with four pieces, I spent fifteen minutes showing Jack how to create a blog. He's promised to let me know when it's up and running. And I'd bet when he does, that it's more than a series of pictures, but also an insight into his working practice. I'd bet too that his inspiration is something similar to what I heard at the nature conference: a sensitivity for what's around him, a sense of wonder and yes, a feeling of rapture.