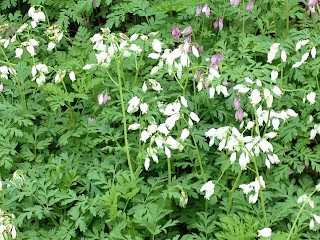 A comment by Mike McCarthy, the Environment Editor of the Independent, got me to thinking this weekend. In a panel debate at the New Networks Nature conference, he said it was a pity people didn't pick wild flowers, because it meant they couldn't look so closely at what's around them.

I agree. Of course, we don't want the raiding of red kite nests or the random picking of soldier orchids, but the assumed correctness of 'take only photographs, leave only footprints' has a counter productive side. If we always look from afar, everything is at a remove.

The National Trust has recognised this in a different context. Its recent renovation of Avebury Manor is a flagship for a more involving approach to heritage: please sit on this chair the signs say, do use the snooker table; try bouncing on the bed.  Returning to nature, the Trust's initiative 50 things to do before you're eleven and three-quarters is a laudable example of a hands-on approach to the outdoors.

In my teens I collected butterflies; nobody thought that was terrible, even if it didn't do much for my street-cred. I also picked and drew flowers, captured newts, dipped ponds, trapped moths and ate many a mushroom.  Some of these activities would be frowned on nowadays, but I don't regret them. And being frank, I've encouraged my kids to do much the same - when looking at the fifty things list, there were only four we hadn't ticked.

The other week I wrote a post about a bloody nose beetle describing the feel of its tiny legs padding over my palm - this was intrinsic to the joy, so too the iridescence of its carapace, only visible by angling the thorax to the sun. I put the beetle down in the grass, but it will die as surely as any cut flower - had I bottled it for a collection it would make no difference to the population of beetles in Pembrokeshire.

That isn't always the case, and as I hinted above, indiscriminate collecting is not what I'm advocating.  But unless we look closely and are prepared occasionally to touch, we sanitise and lessen our understanding - and in the long run, that's not in anyone's or anything's best interest.

As Mike McCarthy said, if people picked a few more wild flowers, maybe they'd also care more about the rare ones.  I think there's a lot of truth in that.
Posted by The bike shed at 8:37 PM