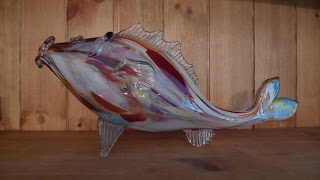 My grandmother used to display glass fish in a cocktail cabinet; next to frosted whiskey glasses and souvenirs from seaside holidays. There were figurines from Spain (though she'd never been) and a resin cast of two hands holding a book inscribed with a poem titled Mother. At the bottom of the cabinet were two drawers of  assorted 'treasures' - I remember a half packet of cigarettes marked with the date she'd smoked her last.

I adored my paternal grandparents. My grandfather was blind and crippled with arthritis; my grandmother stricken with 'nerves' and, until she gave up, constantly puffing on Embassy Virginia. They'd lived through two wars, the great depression, and even seen Newcastle win the FA Cup: a generation gap that's almost unknown today. But for all they were of a different era, they could sense enough of our world to know things weren't right at home. As a teenager I'd cycle to their house on a Saturday - or midweek in the holidays  - and they'd be complicit in the secret when I visited with my father on Sunday mornings.

So my Grandparents' house was a place of refuge - emotionally and sometimes physically. And you know, I think that's why I like glass fish - they remind me of that cocktail cabinet, and how important that house was to my childhood.  I can't think of another reason. For glass fish are rather ugly, most of them of the same designs; they're seldom worth more than a tenner and sell at car boots for pence. 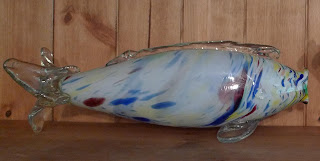 Yet I have boxes of them. To be honest, most of them are in the loft and it's sometime since I payed for any or was given one as a gift. People used to do that when we first bought our cottage in Wales; that was the height of my fish collecting phase. And it's probably not coincidental that my grandfather used to say he dreamed of living in a cottage, of being close to nature - even if he did see it in idealised terms and would have quickly missed his Wallsend council house. Our cottage had a Fifties feel to it then, so I suppose the fish fitted the decor too.

But there's another connection - and I've never told anyone this - I once broke one of my grandmother's fishes. As I waited for a belt round the ear she picked up the shards, rearranged the figurines and gave me a hug - never mind she said, there's more treasures in the drawers. That behaviour would be nothing special now; but at the time it was to me astonishing, and I remember lying awake and thinking how I might find her a replacement.

I never did do that. Though I still have two fish on display in my cottage. They're made of the speckled glass that is known as 'end of day', after the practice of using up the last of the molten pot to create unusual objects at the end of a shift. Later it became a general term for designs that were flecked with colour, the result of rolling glass specks into a clear mixture. I suppose I like the idea that many of these are improvised pieces; I like too their unpretentiousness and to some extent the way they border on kitsch.

I doubt I'll collect any more fish - and frankly the ones in the loft ought to be ebayed for charity. But I'll always keep a few. And just this week I took one down, to place in a bookcase, next to some worthless yet priceless treasures of my own. 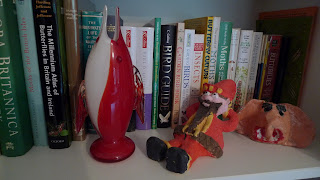