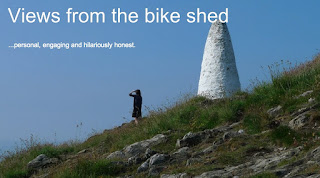 'Isn't it your gig tomorrow?' a friend asked me this morning. Sort of, I hesitated, though not sure I'd call it a gig - it's more of a talk at the local library. 'That's a gig in my book - what time are you on?' About six pm, I told him. 'So you're headlining!' he replied.

Another writer friend told me she'd been developing her 'writer's cv'. I should do one she said, and put my talk on it too. At first, I resisted, but the more I thought about it, the more I liked the idea - if only as a way of taking stock, and deciding what next? There was more to include than perhaps I'd realised.

I've been writing seriously for ten years and somewhere on my computer, there are hundreds of thousands of words, each of them considered, read aloud, revisited, re-read, re-drafted... I've all but finished my degree; I've had articles published here and there, and I've a book coming out next year. But it's my blog that I always put first when people ask, what is it you write? And it's blogging that I'm passionate about as a means for writers to find an audience - so that's what I'm going to talk about on Friday.

Earlier this week, I wrote comments on laidbackviews and mind and language, about the potential for electronic publishing - and the word I used was 'democratising'. I'm chuffed to bits that someone wants to publish me in a 'proper' book (sorry to keep going on about that) but I'm aware of how lucky I've been, and how many excellent writers never get that chance. The great thing about blogs is that they can work for supposedly real writers as well as those who want to have fun.

I put the word real in italics because I believe that we can all be real writers. It isn't about the audience, or being published in print, or completing a proper novel; it's about one thing - care in the words. No matter what we write, be that about family or politics or instruction manuals for tanks, if we care about the words, we are writers. And I don't see why a well-crafted blogs shouldn't be as highly regarded as, say, magazines and newspapers - or books for that matter.

But I also said that blogs should work for those who just want to have fun. (Didn't Cyndi Lauper sing something like that... bloggers, just want to have fun... okay, bad joke.). Having fun with words and pictures is fine, and it may be that some of those who come to my talk this evening want to do just that. I'd encourage them, because, in the way that doodles can lead to great paintings, it just might be that some of them, given a little time, will start caring about the words too. That explains, when I agreed to do the talk, why I suggested it include a reading and not be a technical lecture on how to set up a blog.

So far, this post has been a slight deviation from my self imposed theme of nature during November's nablpomo - but to give it a tangential connection, I was re-reading James Lovelock's The Revenge of Gaia the other day. And in it he argued that the Internet, electronic publishing, and by implication blogs too, are part of a greener future. Virtual entertainment and learning, he claims, cause minimal impact on the environment compared to physical alternatives. So I suppose next time I'm 'headlining' it ought to be on the web, and then there'd be more than the good folk of Haverfordwest who'd get to hear about the bike shed - but in your case, of course, you've already found it.