Sound of the sea 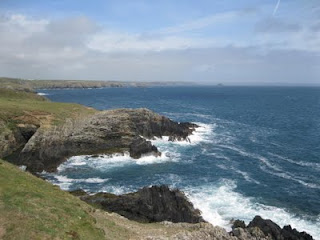 In the morning early
I go down to the sea
And I see the mist on the shore;
I listen and I listen.
I was brought up near the sea and have listened to it all my life.

My junior school was an Edwardian edifice called Rockcliffe, and the name describes well its positioning above Browns Bay near Cullercoats on the North East coast. In winter the windows were streaked with salt, and at break we'd huddle behind the playground walls thinking of the fishermen in peril who were a regular subject of school assembly. One of my earliest memories is playing dare with the swell as it drenched the railings on the lower cliff path.

My mother was a teacher at Rockcliffe. One evening she wrote a song using chime bars to tap out the tune. Later that night she allowed us down from our bedroom to try out the verses and the next day her class sang it in school. By coincidence the school was preparing for a radio broadcast and the producers asked if they could use the song to introduce the show.

That song is now published across the world. It's been a staple of the BBC's Songs for Schools and Come and Praise for forty years. Despite this, my mother received only a few pounds from royaltes until she learned a recording was being used by the BBC as a radio theme tune. She contacted the performing rights society, was given a substantial backdated compensation, and now receives a small, but not to be sniffed at, income from royalties.

A few weeks ago I told this story to some friends on a writing course; one of them remembered the song from her childhood. I sang it in faltering voice, the first time in years. And as I did so it was clear why this simple hymn has been so popular. It is a primary teacher's dream - the perfect musical accompaniment to a project on the seashore. But it also has that quality of drawing our attention to something we're not always aware of, and yet is vital to the experience.

Yesterday my middle son was fifteen. After giving him his presents we went for a walk from Porth Clais on the Pembrokeshire coast. The sky was streaked with plane trails, a sharpness to the air after a morning of rain, the swell on the rocks, ice white. After a mile or so we lay down in a hollow and I sat watching the tide run through the reef between us and the bird island of Carreg Fran.

We must have been there half an hour: Daniel flat out in seconds, Mike cradling his girlfriend, Dylan's imagining himself a Jedi knight and Jane snoozing in the heather. I counted boats (five), watched a cormorant steal a fish from a gull, and tried to remember when I'd last kayaked this stretch of coast. But most of all I listened to sea.

Our thoughts about the sea are tied up with the view, the horizon, our history and memory -  the taste and the smell too. So many things. But I'd defy you to experience the sea without hearing its voice; indeed the sea without sound would be a strangely dead place. Yesterday, with my family on the cliffs above Porth Clais and the wind sucking at the swell, I hummed my mother's song. As the words came back to me, the sea felt more alive than ever - and, just for a moment, so did I.


Here is the song in full. 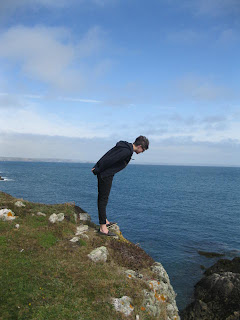 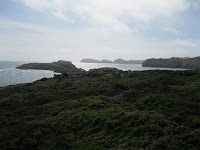 In the morning early
I go down to the sea
And I see the mist on the shore;
I listen and I listen

When I go to the rocks
I go looking for shells
And I feel the sand beneath my feet;
I listen and I listen

When the stormy day comes
Waves crash on the cliffs
And the wind whistles through my hair;
I listen and I listen

And at night when I sleep
And the sea is calm
The gentle waves lap the shore;
I listen and I listen

I sometimes think that God
Is talking to me
When I hear the sound of the sea;
I listen and I listen 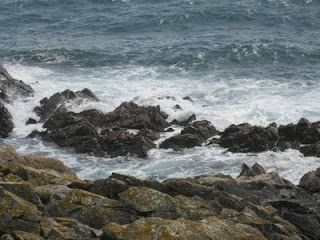 Labels: About me, Family, Wales