New year; and a new resolve 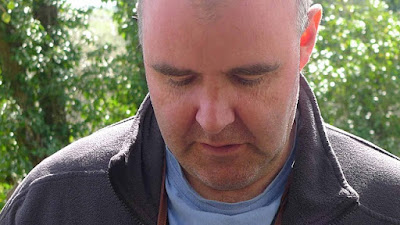 A very rare picture of me, just for the New Year
Yesterday, my friend Debs called by, just as I'd sat down to write my New Year goals. Unusually for me, the process wasn't going well; sure, I had a list of tasks to complete, targets to meet and places to visit - but somehow it wasn't hitting the spot. Much of last year seemed to drift by and I've been wanting to shake up my routine and give it more clarity and purpose - but for all it specificity, the list wasn't capturing the way I felt.
It's hard to describe Deb too precisely; I could tell you she's one of the world's finest and most experienced female kayakers, making her living from guiding clients on the most extreme rivers. She's also a photographer, which supplements her income, along with a small jewellery business, and occasionally, when needs must, decorating my house. For the last two years, she's been studying for a degree at Falmouth University. Oh, and I almost forgot, she's been world champion twice and written a couple of books along the way.

Not bad for someone who left school with only a couple of GCSEs, but then she always had talents of a different sort - and first amongst those is making the most of the opportunities that come her way.

I met Debs when she was teenager; at a kayaking weekend to the Upper Dart in preparation for a trip to the Alps. She was a precocious talent on the water, though off it she lacked confidence, especially with those who were more articulate and academically successful. That's all history now, the important thing is that we became friends and twenty years later I regard her as one of my very best. I value too, her quiet and practical judgement that pays no regard to the inflated egos that abound in the world of outdoor pursuits.

So when I read out my list it didn't surprise me that she got straight to the point. Not wasting your time; that's what you're saying, I think. She was right, I said, it's the underscore of how I've felt recently, perhaps because I'm fifty this year. Age doesn't matter, she laughed, before going on to nail it: The list's okay, but if better options come along you should do them instead. The important thing is not to waste your energy on things like crap TV or negative people or conversations that you've heard a hundred times before.

That isn't a unique insight, but it has more power coming from someone who has so demonstrably succeeded. Most of us find it easier to slip into a sort of sub-life in which so much of your time is spent on the 'stuff' someone else wants you to do, that you haven't the energy for anything else. I try hard not too, and my family are hugely supportive of that, but the older I get the more I resent the wasted time. It isn't work that I dislike or the even the drudge of household chores - I recognise that 'stuff' needs to be done; it's the weekends wasted because of some badly timed appointment, the socialising with people I'd rather not, the inane TV, the unspeakable dross in most magazines, the same in most books, yet another conversation about football...

The one thing I disagree with Debs about, is age. She is right, it should not matter to our valuing time, but I suspect that most young people feel they have enough and some to spare. My sense is that as we  get older we feel the lack of it more keenly - not only in terms of our own mortality, but also in our day to day lives. I'm sure, this is partly the result of carrying more responsibilities, of of time consumed by young families, developing careers and elderly relatives.

For myself, as I enter 2011, I am happier and more secure than at any time in my life; by the standards of the vast majority of the world's people I have opportunities in abundance. I give thanks thanks too, that I'm not looking back with regret, for aside from a few sadder moments, there is little I would change. Rather, as I approach my fiftieth birthday, I am looking forward, with renewed determination, to make the most of the options I have; not to waste the privilege of being alive today.

It isn't possible to map the route I will take - and if it were, a bit like my list, it would be limiting. The really important thing, is to avoid entering the Doldrums, where momentum is lost and I drift aimlessly, hoping and waiting for the metaphorical wind to pick up.

Or as Debs more plainly put it, not to waste my energy on crap TV, negative people or conversations I've heard a hundred times before.
Posted by The bike shed at 11:01 PM