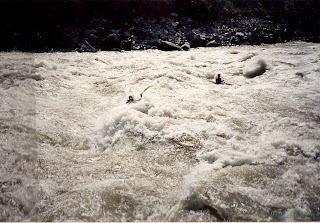 I came across this photograph when sorting the contents of my study. The figure in the centre is me paddling a rapid we named Sweetness and Light on the Karnali river in Nepal. It was taken in April 1993.

The Karnali is the biggest river in Nepal; it lies in the far west of the country, running steeply from Tibet, through dense forest, toward the Indian plain. At that time the river was a recent discovery for kayakers. My friend Phil Blain had been on the first descent, an audacious self supported expedition - our trip was the one of the first to use rafts and take 'paying customers' - we calculated that less than fifty Westerners had been to the area.

When I think back, the risks we took astonish me. For a start I was not that good a kayaker; I had been to the Alps a couple of times and paddled a bit in the UK, but to make the leap to Nepal would never be recommended today. The Karnali was also, at that time, extremely remote (there is now a road) - access required a long trek over unmapped mountains, porters, self-sufficient supplies; there were no satellite phones - and we had no expedition doctor.

We arrived at the river late afternoon, setting up camp on a beach surrounded by trees, monkeys screeching in the canopy. The porters inflated a raft and as the sun was setting I helped them carry it to the water. With my first step into the silted river I felt a grinding tear in my foot; the water ran red and I fainted.

The porters carried me to the camp, blood pouring from the wound. I had stepped on a flint, cutting deep to the bone, across the width of my foot  I remember lying on the sand and the faces above me, the grimaced smiles; you'll be fine they said only a cut. Their voices betrayed the lie, though strangely I didn't feel any pain - in fact, I couldn't feel my foot.

My friends cleaned the wound with neat iodine, stitching it crudely after practicing on the skin of an orange. Four of them held my legs as the needle drew the flesh together; Jane gripped my hands. When it was over, she stayed with me as the others huddled out of earshot. The porters were asked to wait overnight; I was given some rum.

The next morning, before the others woke, I crawled to my boat. It took me ten minutes to launch it, shuffling inch by inch towards the water. I paddled across the current, capsizing as I hit an eddy but rolling upright without problem. It convinced me that the damaged foot made little difference to my paddling.

When I returned I noticed the porters sizing me up. One held a large basket, big enough to carry a man, with holes for legs and makeshift straps to hold the passenger steady.

In truth, my fear of being carried over the mountains was greater than facing the river. I insisted we send the porters home and my friends reluctantly agreed. Jane sat with me as the rafts and kayaks were prepared; the river our only option now - it would be ten days before we reached a road.

As it turned out, the problem was not so much paddling the river as scouting the lines. Because I couldn't walk I had to rely on sketches drawn in the sand. With waves the size of buses these proved useless; I was effectively running the river blind, chasing the tails of other boats and praying they'd chosen the safest line.

One time I got it wrong, ploughing headlong into a deep recirculating wave, known as a stopper. I was sucked deep into the current, emerging shaken but alive downstream; my boat followed five minutes later - bent like a taco by the power of the water. After that I ran the 'chicken shoots' on the bigger rapids: easier lines that give relatively safe passage through the maelstrom.

By the third day my foot was too large for anything but a sandal. After a week it had doubled in size. We had no antibiotics, the wound was drying but my leg was swelling. Thankfully, the river eased and we could make faster progress. By skipping a rest day we made it to the road in nine days.

Back in Kathmandu I went to the Canadian hospital. There were mice running across the floor of the surgery. The doctor was horrified, but not at the vermin. He gave me strong antibiotics and told me I'd been a fool to refuse the carry out - either that or I'd been in shock. Probably, it was a bit of both. The expedition had taken a year to organise; I had come half way across the world; I wasn't going to return without trying.

Looking back, I have a certain pride in my decision to go on; at the very least it is a good pub story. But in truth it was as much to do with fear as any macho heroics. Continuing also taught me about my weaknesses. Regardless of the injury, I learned I was not as confident as I had hoped in such extreme environments; that Jane, who had come for a ride on the raft, was essential to my sense of security; that I had survived rather than conquered the river.

Eighteen years later, as I sit in my study flicking through old photographs, I can still feel the scar on my foot. I can remember too the speed of the water, the screams of the monkeys; the bridge at Chisipani as, at last, we reached the road.

And, on balance, I think that's a good, if imperfect, outcome.
Posted by The bike shed at 12:56 PM