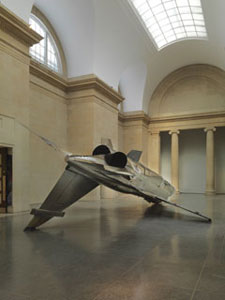 Image from tate.org.uk
I went to the Tate Britain yesterday, my favourite of all the London galleries. At one time it was simply the Tate, but that was before millennium grants and the turbine halls (and empty walls) across the water took away its status as the 'Modern' gallery. The theory was that the old building would have more space to display the best of British - and largely I think that worked.

I couldn't remember when I'd last visited; perhaps four years - but most of my friends were still there: paintings by Patrick Heron and Peter Lanyon, Stanley Spencer and Thomas Gainsborough. And of course, the great man himself, Joseph Mallord William Turner.

The delight of Tate Britain is that much of what it displays is more modern and exciting than half the tosh at its South Bank sister. OK, so that's a prejudice of mine - but go look at the Turner galleries and tell me his paintings aren't as importantt and inspiring now as they were 170 years ago. Or, if you like contemporary, stop in the Duveen corridor to stand under the disturbingly beautiful and scary plane sculptures of Fiona Banner, commissioned by the Tate this year: fantastic.

How ironic then, that precious space should be given over to this year's Turner prize.

I reckon I'm more open to new ideas than most, especially when it comes to art. Even the nagging feeling of 'sure I could've thought of that' doesn't put me off - it's almost part of the pleasure. Its very rare that I simply don't see any value at all.

So it's significant that a day after viewing I now have to look up the names of this year's shortlist... (pause while I go to Google)

Frankly, I can't be bothered to cut and paste them - what you need to know is that there was an inept painter who thought the titles of his pictures more important than the image; a video installation with supposedly provocative quotes (you'd have to be very dull); a set of destroyed canvasses and two stacked chairs (to be fair I liked the pink canvass - for all of a minute), and a room with three speakers playing a woman singing some sort of Scottish dirge. There were lots of words on plaques to explain it all.

A summary dismissal perhaps, but in my view if you have to read all the blurb to appreciate the art, it has missed its purpose. Surely there is better new British art than this - and I'm not suggesting it has to be watercolours or traditional sculpture. Yesterday I felt like the little boy in the Emperor's New Clothes.

What was it he cried to the crowd?

Something like, 'Where are the fancy robes - all I can see is bollocks!'
Posted by The bike shed at 4:54 PM