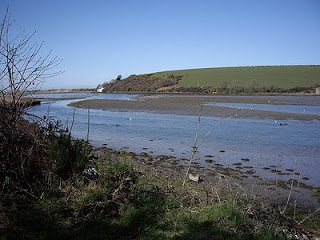 Lower Nevern estuary
The Avon Nyfern is one of the shortest welsh rivers to reach the sea. It springs from the barren marsh at the foot of the Preseli Hills; in less than ten miles and two oxbow bends it has flattened into the most beautiful of Pembrokeshire's estuaries.

Despite its brief length the river does not want to hurry. Nowhere is it steep or straight, it's course a series of delays and diversions, as if reluctant to meet the incoming tide. By the time it reaches the hamlet of Nevern the river is bubbling over gravel beds and fishermen float flies on its sparkling current.


Nevern itself is a wonderful place. The churchyard has the best celtic cross in Wales, an eleventh century masterpiece of intricate weaving curves. There is an Ogam stone too, and yew trees with bleeding sap, and peculiar headstones with rhyming poetry. Over 140 wild flowers have been recorded in the graveyard.
From Nevern to the estuary is an awkward walk, the paths, like the water, reluctant to take you directly. But I have followed the river here, passing the pilgrim's cross that is crudely hewn from the cliff, and the sand banks where the flow eddies and otters leave their prints, though I have never seen one. Eventually you reach the bridge at Newport where the tide and river join.

It is about a mile to the sea from the bridge, but the flow is now imperceptible. The tide becomes the dominant force and when low it reveals a broad mudflat that is one of the richest habitats for birds in West Wales. Egrets have set up home here, foreign amongst herons and gulls and crows, usually keeping their distance. This Saturday I watched the turnstones stilting on the waters edge, probing the mud in a leisurely fashion.

I first came here when the boys were small. There is graded track on the southern edge of the estuary that is perfect for pushing buggies. Despite it being twenty miles from my house, we would make the effort to drive here then walk to the river mouth (known as the Parrog) where there is a boat house and coffee shop and enough to divert the attention of little ones before encouraging them to walk the last few yards to the sea.

Even here it seems the river is reluctant. After the Parrog it carves a deep channel between cliff and sand bar forcing sailors to take a circuitous course toward the Cat Rock and old lifeboat station, before finally the open sea. I have often seen boats caught on the bar here, waiting for the tide to rise, or frantically revving engines to pull free before it falls.

Often those who are caught are holiday makers; visitors from the east that I unreasonably dislike - for in truth, part of me is that too. Except they are impatient to be moving; unsettled by the stillness and at odds with the flow. 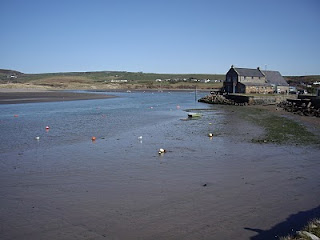 Boat House at Parrog
Posted by The bike shed at 9:14 AM