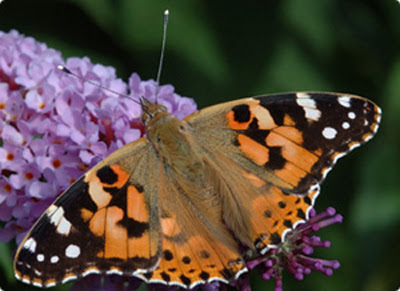 The story below is an edited and adapted extract from a longer essay. It was my winning submission to the National Trust's Butterflty Isles Competition, for which you had to describe an encounter with butterflies.


Painted Lady
I know precisely when I saw my first Painted Lady: the 19th of August 1974, in the garden of my Aunt Marjorie’s house.
Marjorie wasn’t my real aunt. She was our primary school nurse and friend of my mother. Her husband had died in India, serving as the batman to Lord Hunt who led the first successful Everest expedition. She was a redoubtable lady whose house was stuffed with eastern artefacts and Catholic icons; she drove a red Ford Capri, had a casual disregard of the Highway Code and seldom bothered to change gear.

Looking back, I realise that Marjorie’s was a place of escape for my mother. At the depths of my father’s depression we would go there from school. And I’d be sent to the garden, my mother explaining they had ‘things to talk about.’ Marjorie would give me a jam jar and tell me to hunt for caterpillars. ‘Don’t get lost,’ she would joke, ‘it’s a wilderness you know.’

And she wasn’t exaggerating.

Her garden ran down to the railway, the lawn as tall as meadow grass, the borders overgrown with foxgloves, convolvulus, and climbing nasturtiums. There were patches of stinging nettles and thistles, a forgotten bed of lavender and sedums growing between torch lilies that we called Red Hot Pokers. And most impressive of all, by the railway fence, were three towering buddleias, large enough for a small boy to hide in. Two of them bloomed purple madder; the other was pure white.

The wilderness was Marjorie’s delight, her decadent secret in contrast to the clipped roses and crazy paving out front. It was also, though I didn’t know at the time, a perfect butterfly garden. And it was there, sitting beneath the buddleias with the Observers’ Book of Butterflies that I learned to recognise my first species; red admirals, tortoiseshells, brimstones, large whites and peacocks.

After I left primary school we stopped going to Marjorie’s. She retired the year I left for the Grammar, by which time my mother had learned to drive and found new freedoms. I was making my own escapes too and might well have forgotten about my mother’s elderly friend.

Except occasionally, especially when the sun was out, I would cycle by her house and pretend to be passing. We’d stroll down the garden, inspect the nasturtiums and observe what was feeding on the Buddleias. I kept records in a little pocket book that I still have. And I remember her excitement at the Painted Lady. ‘They come from Morocco,’ she said. ‘My husband used to say they were pilgrims. How lucky one should come on your birthday.’
Posted by The bike shed at 4:33 PM