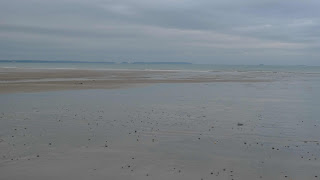 Full moon last night, so a low tide this morning; soft edges to the air, sea and sand. We counted the boats on the bay: four ships and three kayakers; half a dozen walkers and as many dogs in two miles.

The picture is of Newgale beach, taken at eleven this morning, three miles from my house.

It was a typical November Sunday, the wind bitter and the beach at its bleak and open best. At this time of year the sand is at high tide too, though most people don't realise it - for over the summer it gradually accumulates, burying the slabs of rock that the spring storms expose. It is a slow change; subtle, like this morning's light.

And on the beach we saw many things: a star fish with a broken limb, some blennies, a large common whelk, barnacles, limpets and razor clam shells. Few birds today, but an unexpected rock pipit that followed us we played pirates and dug for treasure in the caves.

As we walked back I noticed the variegation on the open sand; bands of darker grit, each with a doily fringe of beige. The stripes were about a foot apart, receding to the sea in a repeat of theme and variation. I realised they marked the fall of the tide; wave after wave, line after line, time after time. 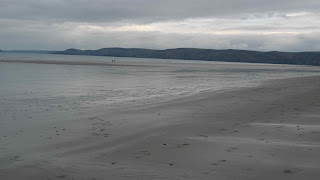 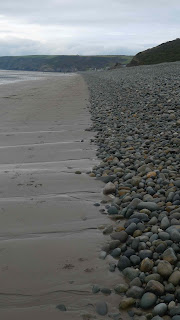 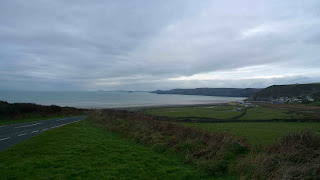