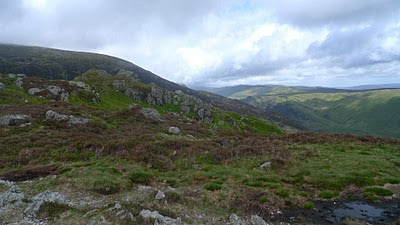 On Saturday, just after dawn, I drove south through Wales. The sky was jaundiced, a grey coat wrapping the peaks of Snowdonia. As I passed through Porthmadog the clouds burst; a heron on the cob hunching its shoulders as if to say, not a-bloody-gain.

Sunshine and showers: one of those mornings when the weather changed with the wind. The road was covered with fallen leaves, tram-lines where the traffic had crushed them. Even Trawsfynydd looked picturesque, its Stalinesque bunker juxtaposed with the purple ridge of the Rhinogs.

Cadair Idris was streaked by Jacob’s ladders, the summit crags piercing the heavy clouds. I glimpsed a buzzard, gliding low over the moor, a rabbit in its talons. From here the road climbed over the Arans, perhaps the most underrated of Welsh mountains, before falling to the village of Dinas Mawddy.

Twenty years ago I had screamed down the same pass on a tandem, reaching speeds of fifty miles an hour – before turning left and cruising over the Bwlch y Groes, the steepest mountain road in Wales. It had been autumn then too.

By ten o clock the sky was clear. The mountains of Powis are softer, the rivers less hurried; a no man’s land between Snowdonia to north and the Brecon Beacons to the south. By the time I reached Llandinam, I’d been stuck behind a horse box, a tractor, a pick-up, and an old couple in an almost as old Vauxhall - whom I stayed behind for the thirty miles to Llangurig... then Rhayader... then Builth…

There was a traffic jam by the upper Wye. I watched the kayakers running the rapids above Hell Hole, lining up to capsize in turn. The jam cleared when road gang remembered to turn their traffic lights on! As the cars passed, one of them waived to apologise, then stopped the traffic again for chat with a farmer.

I was tired as I reached the Black Mountains. The drovers road from Talgarth rises to the Waun Fawr escarpment, then descends to the lovely but slightly down at heel village of Cwm Ddu; beyond here, the river Usk and the bustling affluence of Crickhowell. By then I was on auto pilot, barely registering the hang gliders over Sugar Loaf, the castle at Raglan, the soft crimsons of Wentwood in October.

I love driving the A470. It took me four hours to cover the 140 miles from Llanystumdwy to the Severn Bridge. In that short time and distance I’d travelled through the heart of Wales, passing mountains, rivers, legends, forests, communities... and twenty years of memories.

Of all the choices in my life, I never regret the one that took me to Wales.
Posted by The bike shed at 1:00 AM