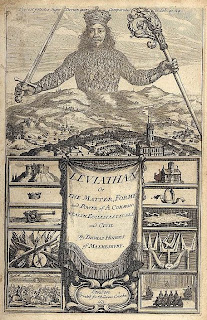 Thomas Hobbes - from Malmesbury near my Wiltshire home - and the first book of political philosophy I read.
Yesterday a leaflet from the Liberal Democrat candidate dropped through my letterbox. It's message amounted to:' Vote for me because I live locally. Don't vote Labour because they can't win. And whatever you do, don't vote for the Conservative chap because he lives in Devon!'

And that was about it!

I exaggerate a little, and it is perhaps unfair to single out this leaflet as the other candidates' literature is no better. But when you consider this constituency has been declared a 'key marginal' is it entirely unreasonable to expect a little more substance? I suspect it is, because the leaflet is merely a symptom of a deeper political malaise.

Last week a colleague moaned, 'Ever since New Labour arrived there's been no difference between the parties.' He might be chronologically correct but it misses the point that the Conservative Party is also unrecognisable from the Middle and Upper Class alliance it once was. A political vision based on preserving establishment values is as outmoded today as at that of a centrally planned socialist state.

And so instead of the old Tory:Labour divide, we have agreement on the central issue of how best to structure our economy and society. Ironically, it is an approach first proposed by the 18th Century Whig party. Put simply, it is the view that unconstrained free markets are the best route to wealth creation and social improvement. This is today's political gospel and any variation between the three main parties amounts to little more than 'same God; different hymns'.

But why is this a problem? Nobody seriously challenges the idea of democracy as the least worst political system, and few would disagree that the rule of law is essential to a civilised society. Surely, agreement on the central issues should lead to greater continuity and less of a stop-start, us and them, politics?

It might do, if there weren't for those awkward elections. But given (quite rightly) that we are not going to give them up, it leads, in practice, to something else. For in a world where we all agree, it is the management of public opinion that becomes paramount to winning votes. We no longer debate how best to structure society; instead we worry about political scandals, minor variations in tax and public spending, and even (as on TV last week) the dresses worn by the leader's wives!

Another problem with the predominant gospel is that, like its religious equivalent, nobody takes it too literally. Genuinely free markets require there to be winners and losers, upswings and downturns. But these are less compatible with managing public opinion - and so the politicians meddle. As result we have more quangos, higher taxes, larger debts and greater intrusion into our private lives than ever before. All of which might be fine if it were directed at achieving something better, but somehow I doubt it.

I am not criticising political intervention per se, indeed that seems to me to be the whole point of government. But I am commenting on why and when political parties chose to do so in the modern context. Why, we might ask, does this Government view the prospect of a recession as something akin to Satan - and yet a spiralling property market (crucially, popular at the time) which has excluded millions from home ownership and landed many more with unmanageable debt was not considered worthy of intervention?

The sad fact is that there is a paucity of political vision. A politician I have met regularly said to me that his Government was only really interested in three things - the economy, the economy and the economy. As an afterthought he added 'maybe education and health too' - but only when they sway opinion. To be fair to the politician, the public aren't renowned for voting on the basis of other considerations.

Take the leaflet I began with: it argued that only the Liberal Democrats stood for a fairer Britain - and to prove it they would introduce tax changes amounting to £700 in the pocket of the average family. So there you have it - the great Liberal tradition comes down to seven hundred quid!  Labour and Conservatives are no better; arguably, it is only the Green Party that has a vision for a substantively different society.

We might say it was always like this; that the idea of 'conviction politics' was an aberration to a longer history of 'control and containment'.  Perhaps, but for a time (roughly 1910 to 1980) it seems to me that we did, in the UK at least, have a genuine debate on how best to organise society - to achieve what philosophers would call the 'good society'.

That last sentence reminds me of my university tutor; he was a German Jewish emigre who had come to Britain in the Thirties. Academic politics, he told us in our first lecture, is the study of POWER and how it is held - historically, domestically and internationally. It is also, he growled, about how power OUGHT to be held! The idea captured my imagination - deep down it still does - and I was to learn that Britain has a rich heritage of political thinkers: Hobbes, Hulme, Locke, Mill, Bentham, Smith, Berlin...

I wonder what they'd make of that leaflet through my door?
Posted by The bike shed at 5:38 PM