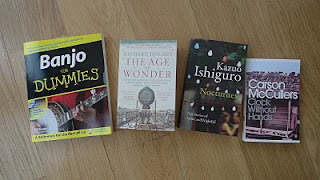 I could do a very short post by saying, 'not a lot'.  For the trouble is, I often find writing and reading to be incompatible. This might seem counter intuitive, but it is not unique - a writing friend of mine once told me she had to give up reading entirely if she was to produce anything serious - 'too distracting' she said, and I empathise.

I've also been learning to play the banjo - so there is a pile of instruction manuals on my desk: Banjo for Dummies; Absolute Beginners; Learn to Play...  Do these count as proper reading?  Not really, but I've enjoyed them nonetheless. I have always wanted to play a musical instrument though quite how it ended up being a banjo I'm not sure. Anyone want to hear my ten thousandth rendition of Cripple Creek?Believe me, you don't; you really don't.

The Age of Wonder by Richard Holmes is non-fiction at its best. Holmes tells the story of the pioneering scientists of the Romantic era: William Herschel, Humphrey Davy, Mungo Park, Joseph Banks, Michael Faraday. It is also an account of a time when the quest for knowledge was an exciting project worthy, of widespread public support - and a reminder too of just how much progress we have made. Admittedly, the grander projects were largely the preserve of a wealthy elite, but not exclusively so. What chance that our Monarch would pay for today's equivalent of Herschel's forty foot telescope and give its inventor an annual salary so they could use it to the full? George III did just that. An inspiring book, superbly written - my only irritation is the small font size.. 'where are my glasses!'


Clock Without Hands by Carson McCullers is my type of novel. Set in small mid western town, it is the story of two old friends, both dying, and two young men, whose lives are inexorably drifting and influenced by factors they cannot control. It's underlying tone is sad and reflective; the sense that 'ultimately, we are all alone' is the bass note of a story that grinds towards an inevitable, unstoppable conclusion. Slow, sensitive and heartfelt.

The Fall by Albert Camus. I had wanted to read this for years - but boy, is it dull. It is so dreary I had to force myself to finish it. The story of a self absorbed solicitor who has given up everything and lives in an existential quandary. It is written as a monologue, the lawyer talking to an unnamed stranger over a number of night.  I can't imagine why he came back; Camus says very little and what he does say is zzzzz...

The Set Up by Joseph Moncure March was an unexpected gift from fellow blogger Carol (Not Only In Thailand) in return for a very small favour. And like all the best gifts, I was delighted to receive it but probably wouldn't have bought it myself - not because it isn't excellent, but because it is very difficult to find. Carol introduced to Moncure Marsh's furiously rhyming prose poems by recommending his better known book, The Wild Party. The Set Up is equally good; the tale of a faded boxer who is expected to throw a fight, but he doesn't know it...  Here is a an excerpt from page 1:

He was supple of build,
Graceful;
Trim:
Heavy above,
With legs slim.
Compact:
Neat.
Light as a cat on his feet.
His neck was solid.
His arms were long.
His bones were heavy,
And his hands were strong;
And whenever he moved, you could see the lithe
Muscles under his skin writhe.
He was slick:
Quick:
Each movement was like a trick.

Nocturnes is the latest book by Kazuo Ishiguro. A series of short stories on the theme of 'turning points', all linked by music and with an underlying sense of regret and lost opportunity. As you would expect from Ishiguro they are skilfully written and the book gradually comes together in a way that is more satisfying than any of the individual stories. And yet I was disappointed. Some writers (Carver or Chekov for example) are masters at the short story; I didn't get that sense with this book - simply not as good as his novels.

Grays Anatomy by John Gray is book I have mentioned before. I have been rereading large sections of his essays: on politics, on the folly of progress; on Green Conservatism. Gray is one of the very best political a philosophical writers; not everything he says is comfortable but at times it seems impossible to escape his logic. What astounds me most is that many of these essays were written fifteen or more years ago - and yet they are so relevant today; almost prophetic at times. His analysis of the issues facing society is absolute top drawer. Intelligent, serious and tough - but worth the effort.

And lastly, Flat Stanley, Paddington Bear and Winnie the Pooh.  All read with Dylan of course. I only read them for him.... honestly, believe me. 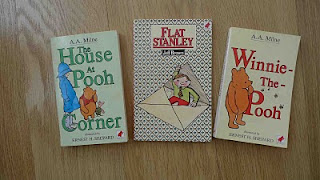 So not a great deal, but some ideas perhaps.
Posted by The bike shed at 9:11 AM