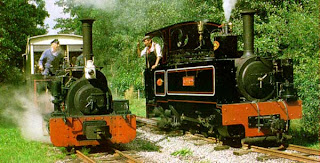 George Orwell observed that the British were addicted to their hobbies... ' a nation of stamp-collectors, pigeon fanciers, amateur carpenters, coupon-snippers, darts players and crossword puzzle fans.' And we might well add  train spotters to that list; as well as model railway enthusiasts, timetable nerds, and more recently 'steam railway volunteers.'

I know this, not so much by observation, as by having a five year old son who is similarly addicted. We have visited more than a dozen steam railways - some many times over. We own six different train sets (Hornby, Thomas, Brio, Christmas special, plastic cheapy and a spare for visitors!). And every day on the walk to school, my knowledge of steam trains increases.

This is an unlikely development. The older boys never played with mechanical toys; before they watched Top-Gear they wouldn't have known a Formula One from a Sports Car. And they still wouldn't know how a car actually works in practice. Not so Dylan. What is that pedal for?  How does petrol fire up?  Do we have to go the Zoo again?

And so, on Saturday, and with some predictability, he said, 'Great  idea, Dad. We can go to see 'Sergeant Murphy!' (Note that he's gone beyond suggesting railways in general, to mentioning specific locomotives.) And whose idea is this? I asked.

'All right, it can be your idea as well,' he replied. Adding, 'We can join the railway club too.'

The big boys declined to come. We didn't insist; they'd only spend the day text messaging friends. And so we left them engrossed in Animal Crossing and MSN while Jane, Dylan and I made the trip to the Teifi Valley in Mid Wales. It is a pleasant drive and we know the roads well; after all, it's not the first time we've been.

Sergeant Murphy wasn't working today. Instead it was Alan George, a narrow gauge steamer more than 100 years old. It is one of five locomotives lovingly restored by rather excellent, if somewhat eccentric,Teifi Valley Railway. Dylan wasn't disappointed; it was a new steam engine for his list, and because it had no cab he could see the workings. 'What does that dial do? Where is the whistle? Can I be the guard?...'

He wasn't disappointed by the journey either. Not that it is extensive. Alan George puffed the three miles from Henllan near Newcastle Emlyn, which is very nearly the middle of nowhere - to, well, the actual middle of nowhere! In fact, the track ends at the remaining half of a bridge that was washed away in floods.

At this point the passengers disembark, the engine does a shifty in a siding to get back to the front of the train, and everyone gets back on again. Dylan carefully positions himself at the front carriage so he can see the engine close up and direct the driver with a running commentary: stoke the fire, blow the whistle, check the water, put on the brakes...

On the return journey there is the option of stopping for a short nature walk, or staying on board and having a cup of tea in the volunteer run cafe. We chose the later; after which we visited the little shop, played on the swings, visited the charity shop, and had another ride on the train. All the while Dylan blew his whistle so loudly (I'm just helping the guard) that the other vistors kept wandering to the platform and I pretended Dylan had nothing to do with me. Nonetheless, he made friends with the driver, the guard (his wife), the lady volunteer in the charity shop who thrust a membership form under my nose. It seems they like enthusiasm in the Teifi Valley.

And quite right too. At one time I would have been as indifferent to steam engines as my teenagers, but I have come to like these volunteer societies - in a way I like them more than the actual trains. I like the way they create a community of interest; how everyone can play a part, no matter their age or class; I like how pointless the whole enterprise is in the grand scheme of things. There is a small industry of miniature railways (there must a dozen in Wales alone) that it is only made possible by people's enthusiasm and goodwill; by contributions that are not going to better anyone's career or make them richer.

And I think that explains why I particularly like the Teifi Valley Railway. It is small, down at heel. and probably not going far. I doubt the bridge will ever be rebuilt; in it's heyday the line never made it to Cardigan. But it is quirky and welcoming in a way that the larger enterprises cannot match. It is the perfect embodiment of Orwell's observation that we are addicted to our hobbies. And it is all the better for it.

As I drove home I was pondering that we'd actually joined a railway society. We will receive a quarterly newsletter, we will be welcome at the Tuesday night meetings and we can attend the AGM. I doubt we will do that. But perhaps we could make a contribution in our way? I could write the occasional publicity piece; Jane has already sorted some toys and bric-a-brac for the shop - and, as Dylan repeatedly points out, he'll happily stand in for the guard!
Posted by The bike shed at 10:27 AM