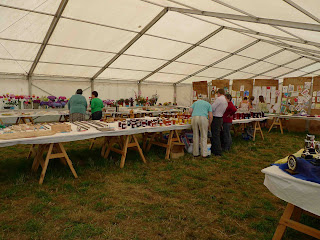 Some serious judging - Neyland Show, Pembrokeshire
Yesterday's post on relativism seemed to raise a lot of questions. So I feel compelled to add some context that will probably just increase the confusion, but hey, I'm only back here for a while...
Some time ago I wrote a post about knowledge truth and facts. I explained that at one extreme we use statements that are necessarily true (all bachelors are men). Close to these on the spectrum of truth statements are assertions that can be 'proved', either by deduction (mathematics) or by observation and testing (scientific facts). At the other extreme we have statements that can only be verified by the speaker (I like chocolate sauce the best) - we call these preferences.
What I didn't say is that there is whole category in between these two extremes - these are called value judgements.
We use value judgements when we make statements such as, 'that was good meal' or ' it was a better essay.' When we talk in this way we are saying more than simply I 'like this meal' or 'I like that essay'. Whether we are conscious of it or not, in saying something is 'good' or 'better' we are judging it against some external standards.
So value judgements are something more than a preference, but not as objectively verifiable as fact. They are also everywhere! We use them to bring up our children, to criticise others, to pass comment on almost anything - and in practice we often treat them in much the same way as scientific facts. In some cases they are so universally accepted that people are punished or vilified for not accepting them - the law, when you think about it, is a sort of 'hard coded' value judgement.
But how do we decide on the underlying standards against which we apply our judgements? Is that not relativism in disguise?
Some thinkers (hard line relativists and what were known as logical positivists - long story, don't worry...) would agree. They would say that the underlying standards are simply preferences masquerading as something more objective. In short, they claim value judgements are nonsense.
But most would reject this view.
For whilst we can't 'prove' that certain standards are better than others, we can offer what John Stuart Mill called 'considerations for the intellect.' In other words, we can use reason to propose standards on which there is general agreement - we can debate these and arrive at even better standards - and we can stay alert to possibilities that might improve them further.
At the extreme we might even ask if anyone has a better alternative? Can anyone tell me how gratuitous torture could ever be justified? Does anyone seriously think that ignoring third world poverty is a reasonable way to behave? Ultimately, the concept of human rights is based on value judgments not scientific facts - and yet we accept them as 'true' and reasonable, as surely as we believe the sun will rise tomorrow.
If we return to yesterday's post and the relative merits of popular and great culture, are there similar considerations for the intellect that might help us? I had a look at the notes for my degree course to see if I could find anything.
It turns out that when I submit an assignment for my creative writing degree it is marked against the following criteria: technical competence, use of style, conventions, subject matter, control, emotional engagement, ability to enter characters, places and energies. And I guess that is not a bad way to explain why Jane Austin is better than Barbara Cartland. We might use the equivalent musical criteria to compare the Beatles against Mozart.
So value judgements are flexible and adaptive, but they are also based on reasoning and observation. They are not simply 'my opinion' which, taken in isolation, has no greater value than yours. They work best when they are applied to widely accepted, clearly defined criteria. And they work less well when we try to apply them to entirely different categories - comparing 'apples and pears' is a saying which sums this up.
Just to be contrary, I actually think we might reasonably compare apples and pears: freshness, organic or chemically produced, depth of flavour, nutritious content ... But as a general rule it gets more difficult and subjective the more variables we introduce and the more nebulous the concepts - comparing apples with philosophy would be a more accurate if less snappy cliche.
So where does this leave us?
Well, hopefully value judgements can give intellectual structure (comfort even?) to those of us who don't like relativism, but need more than preference. The sort of people who are are not especially offended by the statement 'the Beatles are no better or worse than Mozart' - but who can't accept that a valid reasoning for that conclusion is that they are 'simply different.'
Enough. End of conversation....
For now, at least!
Posted by The bike shed at 7:04 PM