Thoughts on food and sex 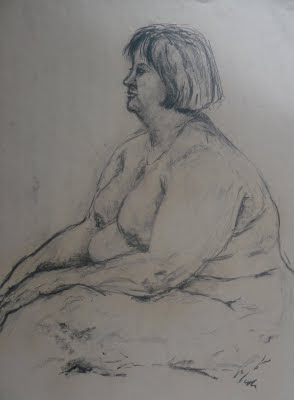 My blog today was going to be about food, but pondering what to write my mind drifted back to one of the first writing courses I attended...
It was more of a retreat than a course. We were sitting in the common room, a group of twelve students and a tutor-cum-facilitator. The wine was open and we'd exchanged pleasantries. What plans did we have, our tutor asked?
There came the usual replies.
One lady was writing prose poems in memory of her son; another was finishing the second volume of her historic trilogy; a doctor from Leicester was writing a farce about the Health Service - a consultant had been caught pissing in the sink; his gay lover who chaired the disciplinary panel was being bribed by a nurse with Munchausen's syndrome who was slowly...
Everyone laughed and I was nervous of explaining my modest goals. But as I came to speak I was interrupted by a very stout lady with a thick Germanic accent.
'I am coming here to write about the sex.'
There was a short pause in the chatter.
'How interesting,' the tutor replied. 'Feminism is such a challenging subject.'
A longer pause.
'I am not wanting these woman issues. I am wanting the sex.'
The chink of wine glasses on the coffee table; eyes to ceiling, window, floor...
'I'm sorry, I don't quite understand?' The tutor filled her glass.
'It is simple; I am only liking the fucking.'
The silence which followed is one of the great comedy moments of my lifetime. It is beyond my powers to describe the excruciating discomfort of those present. Eventually an elderly lady piped up.
'Might I say, isn't that a bit pornographic. I mean, sex in it's wider context is one thing, and passion as part the range human emotions goes as far back as Shakespeare... '
'No, I am only wanting the sex.'
By now I was holding my sides and the doctor from Leicester was frantically taking notes.
The German lady went on to try and make a serious point. She wanted, she said, to write about sex, and specifically the sexual act. What's more she wanted to write about it directly, not by use of context, euphemism or symbolism. This was difficult and most writers bottled out. She continued.
'It is like in writing about the food. The cooks they write about the history and the region and the preparations - but I want to know about the food. I want to know how it is tasting. I want to know what it makes my mouth feel. This is what we need with the sex is it not?'
By the end of her speech our tutor had recovered her composure. 'That sounds very challenging,' she said in a jolly voice. 'Particularity is one of the essentials of good writing. I'm sure we'll all be very interested to hear how you get on.'
And we were too. Each evening a few students would read from the work they'd written that day. The doctor made us laugh with his farce, there were nods of sympathy for the prose poems, and suitably constructive feedback on the second volume of the trilogy.
Sometimes the whole group would gather - more often it was just a few of us. But there was a full house for the night our German friend was due to read. Wine glasses were quickly filled as she opened her folder to speak...
'I have not been doing very much the fucking. So I read you about my favourite food!'
There was an audible sigh - of relief or disappointment, I couldn't possibly say.
Posted by The bike shed at 6:11 PM