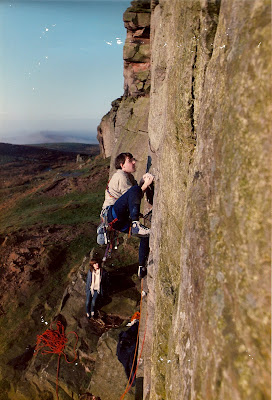 December 1984 - Bowden Doors
Main Wall, 45 Feet - Hard very severe (5b)
A fine route up the centre of the first major wall of the crag. Start in a small corner below an indefinite crack. Climb the corner, exit on right and climb the wall above on good holds to the top.
Northumberland - A Rock Climbing Guide
Bowden Doors is a sandstone outcrop on Belford Moor, east of the Cheviot in the Scottish Borders. In my twenties it was the place of my dreams; the place I learned to climb and where I came of age. It is a place that has never left me.
And so I find it astonishing to think that this picture was taken 25 years ago.
The route had obsessed me for years - almost since I began climbing. Main Wall: the name said everything - no nonsense, just an obvious line up the centre of the crag; hard, steep, uncompromising. And appropriate to the bitter winds and big skies of Northumberland.
I had known for some time that I was good enough to climb it. But I wanted to do it in style and many times refused to practice on a top rope. The route took on a significance well beyond its grade, beyond most other things in my life - climbing it was about more than just moves on rock. By December I had been putting it off for months - for far too long, in fact.
I remember fragments of the day. Ken perched on a ledge taking photos; Simon and Katie flirting and not very interested. The rock, dry and sharp - the smell of it muted by the cold. There was mist that day too, a pale blue mist that the sun slowly burned away. By early afternoon the crag was warmed with a golden light. I walked over and uncoiled the rope.
In the picture I am at the crux move - a high step to leave the corner and pull onto the blank wall. I am heading for the pinkish scoop about four feet above me - there is a tiny nubbin that appears as a dark brown dot half way between my body and the scoop - I will transfer both hands to this and step up, my right foot smearing on a thin groove.
I know all this because there are certain climbs that stay with you: the easy first moves, the awkward balancing in the corner, the dry mouth, the wall above. And I remember the nubbin,the sharpness of the grit as it bit into my fingers - the tension in my tendons as they held my weight.
And the joy as I made it!
I remember too the snug placement of a nut, to save me should I fall - and stepping onto the upper wall, all difficulties behind me - powering upward - jug holds for my hands, and the rest of my life ahead of me... 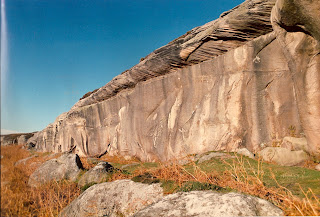 The Wave - northern end of Bowden Doors, Northumberland
One of the most astonishing natural features I have ever seen
Post script:
I returned to Bowden Doors last year; it was a pilgrimage of sorts.
My father was dying and I had travelled north to see him - the first time in twenty years. That evening I drove to Wooler and the next day returned to the crag where I had sought to escape.
There was a young lad struggling on the same route. You reach for the nubbin, I said to him - place your right foot high, and pull for all your life...
When I die, I'd like my ashes to be scattered there.
Posted by The bike shed at 3:21 PM