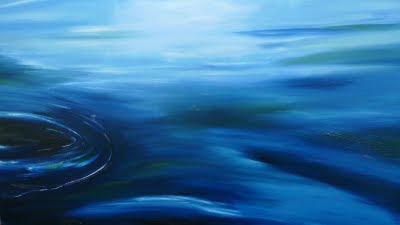 Deep blue sea - M Charlton 2000
I seldom bother with newspapers, but today my assistant showed me an article in the Guardian that I read three times.
The story described the ordeal of of Rom Houben, a student who was paralysed in a car crash and misdiagnosed as being in a permanent vegetative state. More than 23 years later his doctors discovered he was fully conscious - trapped and screaming at world that couldn't hear.
Houben's condition reminded me of the journalist Jean Bauby, a victim of locked in syndrome who eventually wrote of his experiences by 'blinking' out the letters of the alphabet. His book, The Diving Bell and the Butterfly was a bestseller and later became a film. But at least Bauby was able to communicate of sorts - he wasn't thought to be 'extinct'; the description applied to Houben by his doctor.
I kept trying to work out if there was an analogy to the 'brain in a vat' theory - was it a kind of equal and opposite condition I wondered? It is not. The 'brain in a vat' hypothesis suggests that we could all be captive brains, controlled by electric impulses that simulate reality (as in the film, The Matrix) - and yet we wouldn't know it.
But Houben was not a brain in a vat - and there was nothing artificially stimulating his brain. He knew exactly what was happening to him and why. I find it astonishing that in such circumstances he did not go out of his mind.
His solitary incarceration also brought to mind Brian Keenan's haunting book, An Evil Cradling. Keenan describes his four-year imprisonment by terrorists, much of it in isolation. But the ordeal is not comparable either; he could move and converse and elicit a response, albeit trapped in unthinkable conditions.
Ultimately, the closest analogy I could think of was those patients who have reported full consciousness under anaesthesia. They describe their helplessness as the doctors operate on their body. Houben did not have this pain, but he suffered something of the same terror for 23 years. I shuddered at the thought.
Our horror at these stories is understandable. But I find the idea of Houben's ordeal to be particularly shocking. And I think this says something about what we consider most important in being human. Ultimately it is our minds that most differentiate us and give us our place in the world. A fully functioning mind trapped in paralysed body is somehow the worst form of imprisonment.
Consider the opposite situation to Houben's - though it is quite hard to conceive how it would ever happen in reality - a one in which a the mind is paralysed but the body fully active. This is what you might call the Zombie scenario; a being that we do not consider 'alive' in the normal sense. The underlying folklore is that without the mind we are 'living dead'.
From an ethical standpoint, it is our minds that cause us to value human life over other animals. Anything less, says the philosopher Peter Singer, would be speciesism - making an analogy to racism or sexism. The reason, he claims, human life is more valuable than other forms is our ability to understand our situation, to have a sense of the past and aspirations for the future.
And yet, in Western society we are now obsessed with our bodies - well beyond any requirements of physical need. If you ask a group of young people would they like to be clever or attractive you'd get a mixed response to what is an unfair question. But what if you asked, 'would you like to be a little more pretty/handsome or a little more intelligent?' I have a horrible suspicion what the average answer would be.
Of course, we should not confuse a desire to be attractive with the ultimate value of humanity - we do not trade one for the other in our day to day lives. And neither should we underestimate the joy of physical wellbeing. Healthy body and healthy mind - all of us would wish for both, and though we might get our priorities muddled at times,we recognise it is their combination which brings the greatest joy to life.
Indeed, I was thinking about all of this as I went for a run tonight. How lucky I felt; the rain on my cheeks, the wind howling in the streets and my calves slowly easing as I turned for home and a blog post to write.
Posted by The bike shed at 7:09 PM